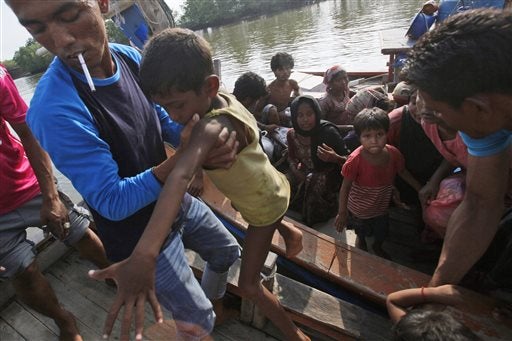 An Acehnese fisherman helps to carry a young boy as boats full of rescued migrants arrive in Simpang Tiga, Aceh province, Indonesia Wednesday, May 20, 2015. The Philippines won praise from international organizations for declaring its willingness to give asylum to the unwanted Rohingya refugees from Bangladesh and Burma (Myanmar) who are now stranded in the Andaman Sea and the Straits of Malacca. AP

MANILA, Philippines–The Philippines won praise from international organizations for declaring its willingness to give asylum to the unwanted Rohingya refugees from Bangladesh and Burma (Myanmar) who are now stranded in the Andaman Sea and the Straits of Malacca.

The United Nations High Commissioner for Refugees (UNHCR) and the International Organization for Migration (IOM) in the Philippines said in a joint statement on Wednesday that they are “reassured that the right to asylum will be upheld” in the Philippines and would be ready to lend support if the refugees’ boats reach Philippine shores.

“The Philippines’ government has consistently offered protection to genuine asylum seekers since 1981,” they said.

“The Philippines has a strong humanitarian tradition of international protection in support of voiceless refugees,” said Bernard Kerblat, the UNHCR representative in the Philippines.

Thousands of members of the Rohingya minority fleeing persecution by radical Buddhists in Burma, after escaping poverty in Bangladesh, are stranded at sea without food or water after they were abandoned by their human traffickers.

Nearly 3,000 have swum to shore and been rescued off Indonesia, Malaysia and Thailand over the past week.

The UNHCR has appealed to Southeast Asian governments to make a collective response to the crisis.

She suggested that the Association of Southeast Asian Nations (Asean) could send a rescue ship for the refugees, but “it should be a concerted effort, a regional action.”

The IOM’s Chief of Mission in the Philippines, Marco Boasso, also expressed his appreciation for the Philippine government’s gesture.

“IOM is ready to support the government of the Philippines and our humanitarian partners in finding sustainable solutions for this group,” he said.

From 1979 to 1990s, the Philippines took in thousands of refugees fleeing Vietnam after the war, establishing processing centers for them in Palawan and Bataan, after its neighbors Thailand, Malaysia and Indonesia turned them away, sparking a humanitarian crisis.

The Catholic Bishops’ Conference of the Philippines (CBCP) on Wednesday praised the government for opening the country to the Rohingya refugees, noting that while the Philippines has no legal duty to grant them asylum, it has the moral obligation to do so.

“We laud our government for its attitude of hospitality towards refugees, even as we urge other nations in the region…to allow these refugees succor and assistance,” said CBCP president Lingayen-Dagupan Archbishop Socrates Villegas.

“For while our own economic resources may not allow us to welcome every migrant as a permanent resident of our country, still there is always room for the weary and burdened to rest on our shores before they continue on their journey,” he added.

Villegas said that the Philippines’ acceptance of Vietnamese “boat people” in the 1970s was “a glorious chapter in our history,” and now it has another chance to serve refugees.–With reports from Jocelyn R. Uy