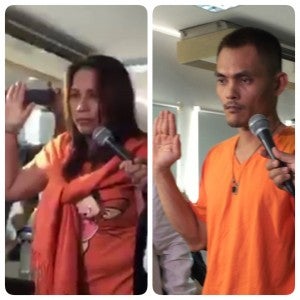 The woman accused of duping Mary Jane Veloso to become a drug mule believed that Veloso is innocent.

In her 32-page affidavit, Maria Cristina Sergio denied that she was the one who introduced Veloso to Ike, a man of African descent who gave Veloso the luggage she carried to Indonesia where the 2.6 kilograms of heroin was hidden.

Sergio and Veloso left the Philippines on April 21, 2010. Sergio said she and her live-in partner Julius Lacanilao lent her money so she can join her in her trip to Malaysia. Contrary to the claims of the Velosos, Sergio said it was Mary Jane and her husband Michael Candelaria who sought their help so Veloso could find a job abroad.

She said Candelaria has no stable income and a known drug pusher in their area.

On April 24, 2010, Sergio said two African-looking men who introduced themselves as John and Ike tried to befriend them while she and Veloso were taking snacks at a restaurant in front of Sun Inns Hotel in Kuala Lumpur, Malaysia.

(I advised Mary Jane to ignore them and don’t trust strangers to which she nodded.)

Sergio said they were surprised that the two men paid their snacks and insisted on being friends with them.

(Ate tine, I think they only wanted to be be friends. I rebuked Mary Jane and told her “let them be. It is dangerous to be friends with foreigners you do not know.)

After that, she said she insisted on leaving but Mary Jane opted to stay with the two men.

Then, after 15 to 20 minutes, Sergio said Veloso returned to their hotel room and told her that the men offered her a job to handcarry a luggage from either Thailand or Singapore.

She told Veloso that she should just wait for the job promised by a friend as a househelp for an ambassador.

Sergio said Veloso is determined to accept the job offered by the two men despite her warnings.

(As long as I can find a job, I will accept any job for my family.)

(I realized that Mary Jane is the type of person who cannot be stopped once she wants to do something so I just hugged Mary Jane and told her ‘God Bless You and take care.)

She said Veloso asked her to bring a box of milk and disposable diapers for her child.

She said the last time she heard from Veloso was on April 25 when she called her and asked her what to do if she exceeded her luggage allowance.

(I fully believe that Mary Jane Veloso is innocent for carrying illegal drugs from Malaysia to Indonesia where she was sentenced to death.)

Sergio and Lacanilao both submitted their counter-affidavits before the Department of Justice.

The two are currently detained at the National Bureau of Investigation (NBI).

Indonesian police were also present during preliminary investigation to observe the proceedings.