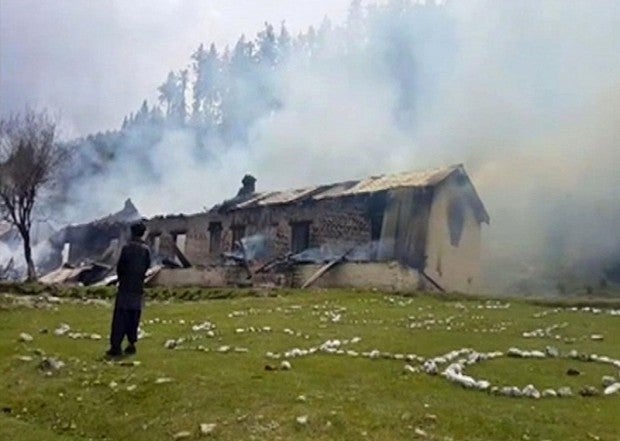 In this still image taken from video, a man watches smoke rising from an empty burning building, belonging to an army school, where a Pakistani army helicopter crashed in Nalter Valley, Gilgit, Pakistan, Friday, May 8, 2015. AP FILE PHOTO

Ambassador Burhan Muhammad, 58, was aboard the military helicopter, along with his wife and a delegation of ambassadors when it crashed on May 8 and set a school building ablaze in the Gilgit area of northern Pakistan.

His wife, the Norwegian and Filipino ambassadors, and the wife of the Malaysian envoy were killed immediately.

Muhammad had severe injuries and had to be evacuated to a Singapore hospital last week.

“Indonesia’s foreign ministry has just lost one of its best diplomats, Ambassador Burhan Muhammad, who passed away at 00:50 on May 19 local time in Singapore,” foreign minister Retno Marsudi said.

Muhammad and his wife are survived by their two sons.

The Pakistani Taliban claimed to have struck the aircraft with a ground-to-air missile hoping to assassinate Prime Minister Nawaz Sharif who was flying to the region at the same time — but the claim was rebutted by officials and multiple eye-witnesses, including foreign secretary Aizaz Ahmad Chaudhry.

The military and Pakistan’s foreign office said the crash was due to a technical fault while landing. Officials added the school was shut at the time.

It was Pakistan’s worst air crash since 2012, when a Boeing 737 passenger plane went down in Islamabad, killing 130 people.