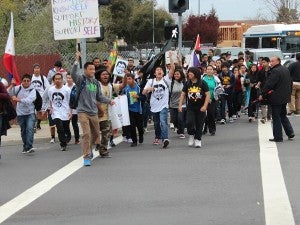 OAKLAND, California — The renaming of Union City’s Alvarado Middle School (AMS) into Itliong-Vera Cruz Middle School remains in limbo as the New Haven Unified School District, which includes Union City, failed to include the name change on its last board meeting’s agenda.

The Itliong-Vera Cruz Naming Coalition (IVCNC) was hoping that the measure would be included in the said board meeting as it had not been taken up for discussion since the measure was passed in April 2013.

The Coalition decided to have its spokesperson Joe Angeles address the board led by President Michael Ritchie and co-Superintendents Dr. Arlando Smith and Akur Varadarajan, to give an update on the coalition’s activities as well as the expectations of the community and the financial issues related to the renaming.

Renaming Alvarado Middle School in Union City  after Itliong and Vera Cruz is still on hold.

“These individuals and organizations have brought various resources that will assist in meeting the district and community expectations in the naming effort,” Angeles added.

The measure was made possible after the motion of board member Michelle Matthews was passed 3-2 for the name change, but it would be effective only in the fall of 2015 with the implementation plan in place and enough funding has become available.

The original renaming measure was introduced by then-Board President Linda Canlas after a naming committee submitted the names of the Filipino labor movement leaders to the board. Prior to this, Matthews stated that the board in an earlier meeting unanimously approved renaming AMS, thus the creation of the naming committee.

A naming committee then mulled various names before presenting the board with the “Itliong-Vera Cruz Middle School” name — an idea that had been kicked around the district for 13 years and passed over three times in the past, board members said.

Many of those opposed to the change argue that it would neglect the historic significance of its current name — that of two-time governor Juan B. Alvarado, who served as California’s governor from 1836 to 1842, and for whom the town of Alvarado was named.

According to Canlas, the Itliong-Vera Cruz name has been considered since the renaming of New Haven Middle School to Cesar Chavez Middle School 13 years ago. The name had been passed up four times in the past, she said.

Angeles, one of the founders of the New Haven Pilipino American Society for Education or (PASE), which serves as the school’s connection to the community in Union City, claimed that their group is actually a part of the community coalition that has been asking for renaming a school or building for Vera Cruz. It added Larry Itliong in1992.

“It is very important that we start opening our eyes and allow the people that are part of American history to be part of this district,” Canlas maintained in her sponsorship, which was supported further by about 150 local youth who marched from James Logan High School to the New Haven Board of Education meeting to voice their support.

From 2013-2015, there were requests by the IVCNC to find out the transition process that would guide the name change including its cost.

“Unfortunately, due to the district’s change in superintendents (they now have two co-superintendents) and own transition, discussions were somehow never scheduled and thus were never held, although we requested (for) it,” Angeles recalled. “Because of this, our schedule has been set back by two years.”

Besides, the renaming remains a controversial issue in the district, a probable reason its discussion has been postponed. Angeles revealed that confusion and misinformation on how money for the project would be raised prompted some quarters to object to the renaming.

The budget for the renaming itself has grown to as much as $46,000 from an original projected amount of $5,000, which went up to $8,000 then $16,000 and so on for the new signage, stationary and other incidental expenditures. This gave way to another side issue that has not been cleared up – on who is paying for the whole thing and what is the contribution of the district.

“While we are willing to participate in the fund-raising efforts for the cost of renaming, we never intended to shoulder the whole thing because that would imply that we are buying the school’s name rights, and that with the right amount of money, we can change the name of the school,” Angeles contended.

“We wanted the renaming be kept within the scope of equity and diversity and that we are honoring both these gentlemen for their efforts during their times. When the name was changed for Chavez, the community that Chavez represented was not asked to defray the cost for the name change,” Angeles said further.

A couple of board members were reportedly taking an all or nothing stand — that if the money needed was not raised, the change should not take place.

As another board meeting draws near and the possibility that the issue would be finally be calendared for discussion, three scenarios loom: there would be no renaming; a full implementation delay for a year; or a renaming in August.

“Of course, we are hoping for the last scenario especially since Filipinos Linda Canlas and Jonas Diño are on the board,” Angeles said. As I have mentioned before the board we got a lot of support from the community to help defray the cost — some volunteer services from different unions (like electrician and construction unions) in Alameda county and materials that could be worth $20,000,” an optimistic Angeles claimed.

Read Next
Tia Carrere, Daniel Ho lead attempt to break world record for ukulele group strum
EDITORS' PICK
Omicron variant detected in more countries as scientists race to find answers
Gov’t plans to open COVID-19 vaccination for 5- to 11-yr-olds by January 2022
A delightful blessing!
Villar Group gears up for AllValue Shopping Party on Dec. 3; around P 1-million promos and discounts up for grabs
Legarda: Ending Violence Against Women, a cause for all
Gov’t eyeing COVID-19 vaccine booster for essential workers, indigents by Dec. 10
MOST READ
Quiboloy warns of ‘much worse than Omicron virus’ if his ‘persecution’ is not stopped
Suspected Omicron cases mild, says leading S. Africa doctor
Bongbong Marcos’ conviction in tax case not a crime involving moral turpitude — lawyer
Marcoleta defends pol ads on ABS-CBN
Don't miss out on the latest news and information.