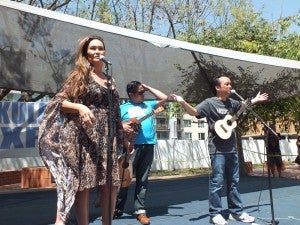 While the certainly large and enthusiastic crowd of ukulele players of all ages and abilities practiced and played along with Carrere and Ho in Little Tokyo, they fell short of the 2,135 required. The April 18 Ukulele Expo began early with official registration and last-minute ukulele purchasing just outside the sponsoring and organizing store/coffee shop known as U-SPACE in the Japanese American Cultural & Community Center’s open plaza.

According to one of the organizers, Brad Ranola, the previous attempt last year brought out only 1,100 participants. Carrere and Ho helped to publicize this year’s event with appearances on the local KTLA Morning News.

Many ukulele groups, classes and individuals came out to enjoy the sun and fun at the Expo. Among them were many Filipinos, Hawaiians, Hapas and other Asian Pacific Islanders, creating a very diverse mix of ukulele strummers.

One Filipina in the audience, Lillian Tamoria, just bought a ukulele that morning in order to join the record-breaking attempt and was encouraged by her community activist friends Gil Mangaoang, Rose Ibanez and Marsha Nardo. The chosen song “Pua I Ka Ua (Flowers in the Rain)” was an easy tune, requiring only two chords, F & C. 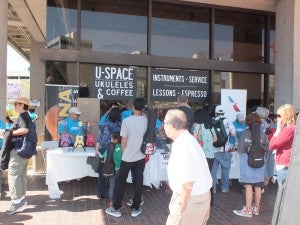 To help guide the practice run and actual performance, large placards with the chord diagrams were held up when to play the respective chords. In order to qualify for the word record, the group play along had to last at least five minutes. Printable song copies were available for download from the on-line Ukulele Expo registration website.

To further qualify the entire group had to be visible for video and photo documentation of the world record attempt meaning, no tent shade from the warm spring sun. Supporting businesses, including Union Bank of California and community supporters like Asians For Miracle Marrow Matches (A3M) set up tables to distribute freebies and recruit for the National Marrow Registry.

Volunteers in bright Blue shirts moved players along into the designated open space and many also pulled out their own ukuleles to join the head count.

After the group play and sing-along record attempt, Carrere and Ho treated the audience to a free mini-concert. Donated raffle prizes included handcrafted custom ukuleles by Pepe Romero. A hula dancer joined the stage for one of the songs and afterwards both celebrities signed autographs and posed for photos with the audience.

It was a long day and although the final registered count came up short, all the volunteers, organizers, celebrities and ukulele players had a great time making music together.