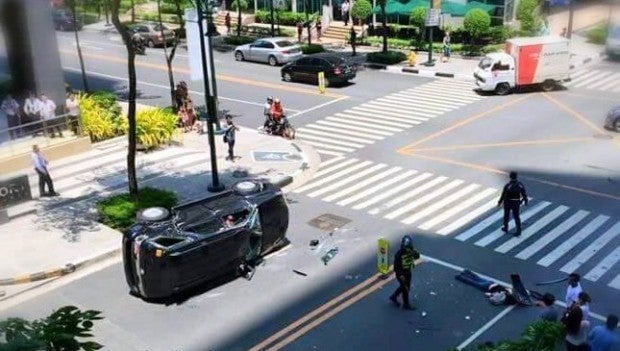 The Thai national who was run over by a sport utility vehicle that lost control after being hit by another vehicle on Tuesday remained in critical condition in a Taguig hospital.

He said Coote, a housewife, sustained injuries after being hit by the vehicle of 53-year-old Rolando Manese, a Toyota Fortuner with plate number AAL-6646, which spun out of control in the air at the corner of 30th St. and 2nd Ave. in Bonifacio Global City at 11:15 a.m.

Saguran said this was after the SUV, which was registered to Manese’s employer, businessman Roger Lagmay, was hit in the right rear portion by another speeding vehicle, a Toyota Fortuner wagon with plate number NMI-615, driven by Anne Alison Soriano, 35.

Saguran said prior to the accident, Manese was plying 30th St. and was on his way to C5, while Soriano was plying 2nd Ave.

In her statement, Soriano said that at that time, she was coming from Forbeswood Parklane and was on her way to a Shell gas station on 32nd St. to gas up since “the yellow light (prompter) in my vehicle had already been on since I turned on the engine of the vehicle…”

“…That is why I was driving so carefully because I was worried my vehicle would stall anytime (…kung kaya napakahinahon po ng aking takbo sa pagaalala na ako ay tumirik anytime),” she said.

Saguran said, however, that both drivers were at fault as they did not stop at the intersection, where there was no stoplight.

“If there is no stoplight, slow down while approaching the intersection because that is an intersection…If you don’t slow down, you will collide with another vehicle,” he said.

According to Saguran, the victim’s husband, Douglas, an Australian national, was “sad” when he (Saguran) spoke to him recently.
“He said he didn’t know what to do. The victim is maybe in a serious condition…and is still being checked, because you know in St. Luke’s, they are very meticulous …,” Saguran said, noting that as of press time, investigators couldn’t talk to her.

“Maybe, she will have to undergo an operation. She was hit in the face, in the head, shoulder, thereabouts,” Saguran explained.

The investigator said as such, Douglas, who works in BGC, had said his concern as of now was the wellbeing of his wife, who had just visited him at work when the incident happened.

“It’s a good thing she didn’t bring with her their children who were being taken care of in their condominium. Because based on what I gathered from Douglas’ friends, it was routine for her to bring her two small children,” Saguran said, noting that the Thai national was “already 20 to 30 steps away” from their condominium unit in Crescent Park.

He said the Australian national would first “observe” Coote’s condition before deciding whether to file any charges against Manese or Soriano.

“But (both drivers) are very cooperative. They are willing to pay for expenses,” Saguran said.

Saguran could not confirm social media reports that the Thai national was pregnant at that time.