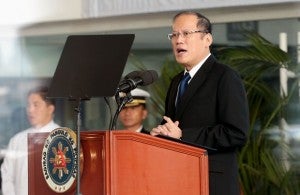 President Aquino on Thursday ruled out a military confrontation with China over the worsening territorial dispute in the South China Sea.

In an interview with Bombo Radyo, the President likened a military action to the local game pitik sa ilong or flicking the nose with the fingers.

“I don’t agree with the [suggestion] that a military confrontation is inevitable or cannot be avoided,” Aquino said.

Even in a flicking-of-noses match with China, the Philippines, he said, has a problem: “They [Chinese] are 1.3 billion, we are only 100 million.”

“As children would say, let’s just flick each other on the nose. We give them one flick on the nose, they give us 13. Our noses would swell right away,” the President said.

Still, the government continues to strengthen the capabilities of the Armed Forces of the Philippines (AFP), Aquino said.

“I hold my head high and without fear that someone would contradict [me] if I say that the AFP’s capabilities now are so much more than before,” he said.

The President said under the capability upgrade of the AFP, the military now has Hamilton class-cutters for the Navy, brand-new and refurbished helicopters and more than 70,000 rifles.

Two Korean-made FA-50 trainer jets will be delivered at the end of this year.