Aquino: ‘I won’t waste my time arguing with Celia Veloso’

President Benigno Aquino III said he would not engage in a verbal tussle with Celia Veloso, mother of Filipina Mary Jane Veloso in Indonesia’s death row.

“May obligasyon tayo na pangalagaan ang kapakanan ng lahat ng Pilipino (We have an obligation to take care of the welfare of all Filipinos),” he said during an interview with Bombo Radyo on Thursday. “At iyon ang ginawa ng gobyerno mula pa nang 2011 (And that is what the government did since 2011).” 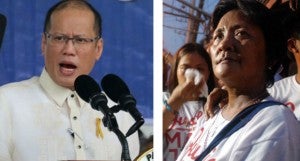 Aquino said his administration has been working on Mary Jane Veloso’s case since the start of his term.

READ: Aquino fends off charges that gov’t did nothing to help Veloso

“Kung palagay ng nanay n’ya kulang ang ginawa namin hindi ko na aaksayahin ‘yung oras ko na makipagsagutan. Importante sa akin, ano ba ang magagawa natin para mapangalagaan ‘yung buhay nitong si Mary Jane lalung-lalo na para doon sa mga anak nya (If her mother thinks what we did was insufficient, I won’t waste my time arguing with her. What is important for me is what we can do to ensure the safety of Mary Jane, especially for her children),” he said.

Nevertheless, at the end of the interview, when Aquino was asked for a one-word reply to various media personalities, he said “Unawain (Understand)” for Celia Veloso.

Mary Jane was supposed to be executed in Indonesia last month on drug trafficking charges but was spared because of the appeal of the Philippine government and other concerned organizations.

Celia Veloso, however, said Aquino’s administration should not get credit. She accused the government of mishandling her daughter’s case.

“The government committed a lot of mistakes. The truth is, if my daughter’s execution had pushed through in April (among the many dates initially set), we would never have felt President Aquino’s presence. He really did nothing at the time,” she had said. IDL

READ:‘It’s the mother in me, the pain in my heart, I’m sorry’