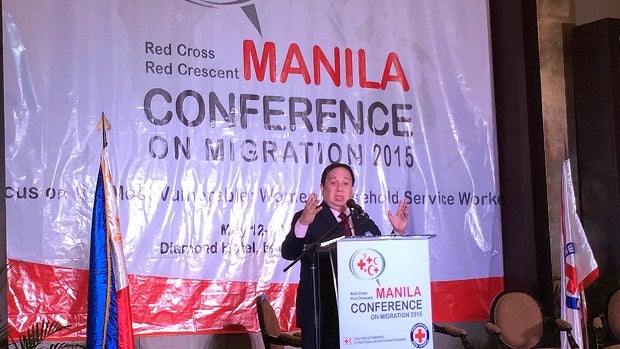 Various formations of the International Red Cross and Red Crescent movements are uniting to establish an international help line which can benefit women migrant workers, especially those employed in the Middle East.

During the opening of the Red Cross and Red Crescent Manila Dialogue on Migration 2015 on Tuesday, Philippine Red Cross Chairman and former Senator Richard “Dick” Gordon said that establishing an international help line for women migrant workers is a “game-changer.”

He said that through the help of various formations of the International Red Cross and Red Crescent Movement, the Red Cross is now taking a proactive role in saving migrant workers, especially female migrant workers whom they deem as the “most vulnerable.”

“What is significant here is that the Red Cross and the Red Crescent (are) taking a strong posture now rather than being an observer. We are now going to utilize the vast power of the movement to have our people call us when help is needed on the ground and to use our 152 years of experience in governance to make sure they are protected,” Gordon said.

Gordon said that on the part of the Philippines, it has already established a 14-seat call center to address the grievances of overseas Filipino workers (OFWs).

In his keynote speech, Gordon turned emotional as he recounted the struggles faced by Filipinas abroad who are working to provide a better future for their families.

He even cited the case of Indonesian drug convict Mary Jane Veloso, who was spared from execution following a last-minute reprieve, as an example of how women migrant workers are vulnerable to abuse.

The Manila Conference on Migration 2015, which started on Tuesday, is attended by delegates from the National Societies of Asian countries, government officials, international organizations and nongovernment organizations.

At the end of the conference, it is expected that the Red Cross Movement will ink the “Manila Declaration,” an agreement containing protocols which will guide the movement in extending assistance to women migrant workers.

Figures from the Red Cross show that out of 232 million migrant workers worldwide, 43.2 million are women and are vulnerable to abusive practices by their employers and recruitment agencies. IDL