Lawyers of Ma. Cristina Sergio and Julius Lacanilao have asked the Department of Justice investigating prosecutor to exclude the affidavit of Mary Jane Veloso on the complaint for human trafficking, illegal recruitment and estafa.

Atty. Howard Areza of the Public Attorneys Office (PAO) said during Monday’s preliminary investigation of the case that Veloso’s affidavit must be subscribed before State Prosecutor Susan Azarcon, the investigating prosecutor. 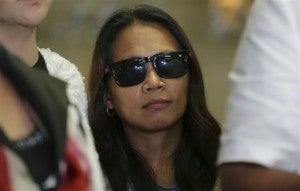 The National Bureau of Investigation (NBI) had filed human trafficking, illegal recruitment and estafa with swindling case against Sergio and Lacanilao.

The NBI used as basis in their complaint the affidavit of Veloso which was taken by members of the Philippine Drug Enforcement Agency (PDEA) last March 31 in Indonesia.

The PDEA then turned it over to the NBI which initiated the complaint against Veloso’s recruiters.

“It is unfair for our client to be compelled to respond to that affidavit [of Mary Jane Veloso] considering that it was only transmitted by PDEA to NBI,” Areza said.

“We are invoking the provisions of the criminal procedure that there should be a personal appearance and subscribed and sworn to in accordance with the Rules on Criminal Procedure,” he said, adding that non-appearance of the complainant can be a ground for the outright dismissal of the complaint.

But Atty. Rey Cortez of the National Union of Peoples’ Lawyers (NUPL) said that if Sergio and Lacanilao believed that their case is strong, “why dwell on technicalities.”

(It would be impossible to send people from DOJ to Indonesia just so Mary Jane can swear. There was a compelling reason why that couldn’t be done. While the manual requires that, it doesn’t mean you have to follow it. Under the circumstances, this procedure can be waived.)

He added that even if Veloso’s affidavit has been excluded, the case will stay strong.

“It is a matter of judicial notice that Mary Jane is in prison. You do not have to prove it. Under the law, in cases of human trafficking, even the relatives can file the complaint,” Cortez said. AU