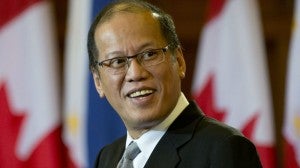 OTTAWA, Canada—President Benigno Aquino III on Friday said the Philippines was exploring an option to stop China’s land reclamation activities in the South China Sea, even as Canadian Prime Minister Stephen Harper called for calm among the rival claimants to the disputed waters.

The President said he would convene a meeting to discuss the “next avenue of approach,” which he could not reveal just yet, as soon as he returns to Manila from his three-city swing through Canada.

“Are there any other things that we can do? Yes, but I am not at liberty to tell you at this point in time because I will probably be advertising to the other side how to counter the next move that we have, which I think is imprudent on our part,” Mr. Aquino said, speaking at a joint briefing with Harper at Parliament Hill.

Satellite images have revealed China’s extensive land reclamation efforts around seven reefs in the disputed Spratly chain of islands, an act that Philippine officials had said was destroying acres of coral reefs, aside from impinging on the Philippines’ territorial claims.

The Philippines, Vietnam, Malaysia, Brunei and Taiwan have overlapping claims to the land and waters of the South China Sea which China claims almost in its entirety.

The South China Sea is home to strategically vital shipping lanes and is believed to be rich in oil and gas.

Harper, who said that Canada does not take positions on maritime territorial disputes, called for respect for rules in the international sea lanes.

“What I would say is this, however, that there should not be provocative and unilateral actions in this regard. That all parties should respect international responsibilities and any international rulings on the matter,” he said.

He said the President had raised the matter with him in their meeting.

Mr. Aquino said the Philippines had always abided by the Declaration of Conduct of Parties in the South China Sea (DOC) and “refrained from escalating tensions” in the area.

A 2002 nonaggression pact between the Association of Southeast Asian Nations (Asean) and China, the DOC has failed to stop clashes in the international sea lanes. The Philippines has pushed for a Code of Conduct to replace the DOC, but China said the time was not ripe.

Mr. Aquino said any ruling by an international tribunal on the case that the Philippines has brought before it questioning China’s claim over 90 percent of the South China Sea region should serve as a guide to all parties.

“[The] Itlos (International Tribunal on the Law of the Sea) decision will clarify the situation and, therefore, once clarified, then everybody who says that they are conforming to international rule will have to make their decisions and make their activities consistent with the findings of this international tribunal,” he said.

Any clarification in the ruling should become the basis for interaction of all parties, he added.

“We are hoping that everybody’s entitlements and obligations are clarified so that there is stability that is induced in the region, which is a necessary precondition for everybody’s prosperity which I think all [claimants] in the area are aspiring for their people,” he said.