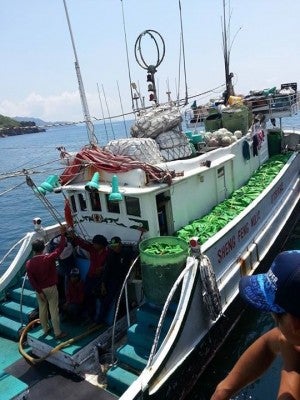 A Taiwanese fishing vessel was seized off Itbayat, Batanes on Thursday, the Bureau of Fisheries and Aquatic Resources (BFAR) said.

Itbayat is the farthest inhabited island in Batanes.

Rivera said two Taiwanese and four Indonesians were caught on board the vessel and were charged with poaching or illegal fishing within Philippine waters.

He said other fishing vessels were also spotted in the area but the limited patrol boats of the BFAR and coast guard prevented them from apprehending these ships.

He said that based on the documents of the arrested fishermen, their permit papers were to fish off Phuket, Thailand and Indian Ocean only.

Rivera, however, said the six fishermen were given “temporary liberty” after they posted bail before the Batanes Region Trial Court (RTC).

Rivera said Judge Ramon Barona initially set the bail at P30,000 but was reduced to P15,000 after the camp of the fishermen filed a motion to reduce bail.

Rivera said the fishermen remain in Basco, Batanes and were not allowed to go back to their countries because they need to appear in court until the proceedings are finished.

He, however, said that Batanes has limited patrol boats to run after illegal fishing vessels in Batanes’ waters.

According to him, a patrol vessel from the regional office, the BFAR MCS 3007,  is now in Batanes but will only be there this summer.