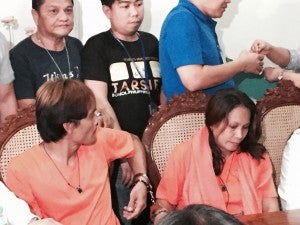 The lawyer of Ma. Cristina Sergio and Julius Lacanilao on Friday dared the government to release a signed confession of his client admitting ties with international syndicates.

A resolution from the Department of Justice (DOJ) released Thursday mentioned that Sergio admitted ties with international drug syndicates and identified contacts in Manila, Hong Kong and Malaysia, most of which are African-American nationals or from Nigeria.

“I don’t know what tactical interrogation pero there was no signed confession. There was no counsel present if ever. If there was a written confession, they should have shown it right now,” Atty. Howard Areza of the Public Attorney’s Office (PAO) told reporters.

Sergio mentioned in her statement that when she was in Hong Kong, her contacts offered her $5,000 to bring drugs to the Ivory Coast.

She added that the person named “Ike” who gave Veloso the luggage containing 2.6 kilograms of heroin is a Nigerian national.

Sergio said she and Lacanilao started working as drug mules in 2010 for a West African Drug Syndicate cell in Malaysia headed by a Nigerian national.

When asked if the information given were fabricated, Areza said “I am not saying anything. What I am saying is that there was no written confession.”

Sergio and Lacanilao personally appeared before the DOJ Friday to attend a preliminary investigation on the human trafficking, illegal recruitment and estafa filed by the National Bureau of Investigation (NBI) based on the affidavit of Mary Jane Veloso.

The next hearing is set on May 20 where Lacanilao and Sergio are required to submit a counter-affidavit. AU