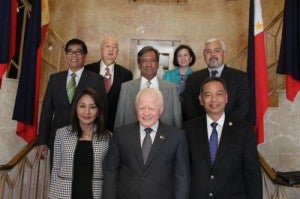 WASHINGTON, DC — A delegation from the Philippines House of Representatives visited here April 27 to 30 to highlight the Philippines’ important role in the global maritime industry.

The Philippines is currently the fourth largest shipbuilding country in the world. it is also the world’s leading provider of maritime professionals representing 30 percent of global merchant vessel manpower.

Gerardo Borromeo, CEO of Manila-based Philippine Transmarine Carriers and Board Director of the US-Philippines Society, noted that commercial shipping is often referred to as the “invisible industry” and underscored that the Philippines’ substantial and evolving role in maritime affairs can be boiled down to the statement, “We move the world.”

“As maritime nations, the Philippines and the United States are working together to preserve maritime security. Both countries recognize the current challenges as well as the opportunities and we thank our congressional delegation for promoting further areas of cooperation especially in the area of maritime training and ship repair,” said Ambassador Cuisia.

The delegation on April 29 met with the Chairman of the Sub-Committee on Asia and the Pacific of the House Foreign Affairs Committee Matt Salmon (GOP-Arizona) for a review of broad policy issues.

Members of the delegation joined a public forum on April 29 at the Center for Strategic and International Studies (CSIS), one of Washington’s premier think tanks.

US-Philippines Society Co-Chair John D. Negroponte described a shared concern for preserving the vast richness of aquatic resources and for maintaining unimpeded access to the major nautical highways facilitating trade in and out of Asia.

Joe Cox, CEO of the Chamber of Shipping of America, gave an international private sector perspective, highlighting the potential for Filipino seamen to take on positions of greater technical responsibility in the shipping industry.

Borromeo and Rep. Manalo said the delegation’s visit succeeded in fostering dialogue between Philippine and American legislators on improving operating standards, enhancing cooperation on training and student exchanges, and exploring commercial opportunities in the Philippines for repair and maintenance of US naval and civilian vessels.

In meetings outside Congress, the delegation exchanged views with the US Maritime Administrator Paul Jaenichen and Craig Bone of the American Bureau of Shipping.

An off-site tour of training facilities run by the International Seaman’s Union in Southern Maryland provided an opportunity for a firsthand view of the latest in training and processing procedures for American seamen.

Negroponte said the US-Philippines Society, in partnership with the Philippine Embassy, was delighted to play a role in stimulating more discussion about global shipping in the 21st century, and exploring opportunities for both countries in one of the world’s most vital industries.