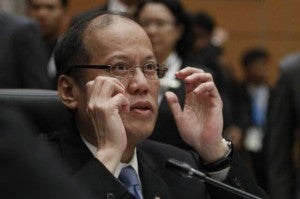 CHICAGO, Illinois—When President Aquino arrives in this Windy City Thursday morning (Wednesday afternoon in the US), he must be prepared to answer a question foremost in the mind of one of the 140,000 members of the Filipino community here.

accountant Edilberto Ortiz said he would ask Mr. Aquino during the President’s “meet and greet” with 500 representatives of the Filipino community in the evening.

“We’ve been waiting for this (visit) for the last five years,” said the managing partner of E.C. Ortiz & Co., LLP, of the President’s first meeting with Filipinos in this city since he assumed office in 2010.

In his whirlwind stop here, President Aquino is expected to report on the country’s gains under his watch. He flies the next day to Canada for a three-day swing through Ottawa, Toronto and Vancouver in a final push at boosting bilateral relations between the two countries.

Aquino is set to meet with Canadian Prime Minister Stephen Harper and Governor General David Johnston, business executives and the Filipino community, which makes up two percent of the population in Canada.

No meeting with Obama

A meeting with US President Barack Obama during his Chicago stop was out of the question, Palace officials said on Wednesday.

“While we deeply value the friendship with President Obama, the decision to go to Chicago was driven largely by the fact that (President Aquino) has not yet met the Filipino community in that area,” said Foreign Assistant Secretary Maria Andrelita S. Austria, who briefed reporters about the visit.

While he won’t be meeting the US President, Aquino will receive a courtesy call from Chicago Mayor Rahm Emanuel who served as Obama’s chief of staff before he was elected mayor in 2011, Austria said.

The President was also expected to have a round-table discussion with members of the US Chamber of Commerce and the US Asean Business Council, “who have expressed keen interest in doing business with the Philippines,” she added.

Aquino was bringing a 98-member delegation on his state visit to Canada from May 6 to 9, most of them Cabinet officials.

The Office of the Executive Secretary (OES), which takes over Malacañang during the President’s trip, did not provide the estimated travel cost for the trip and the full list of the President’s delegation.

The President also hoped to generate more tourism dollars from Canada which ranked 7th in the country’s tourism market.