Visiting French cartoonist: Our language is the picture 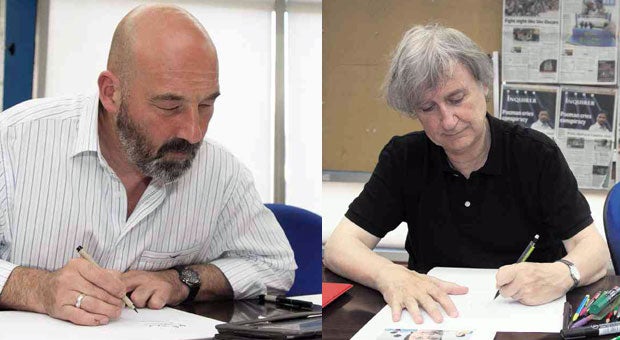 MANILA, Philippines–You don’t have to speak French to understand them. They express themselves through the cartoons they draw. “Our language is the picture,” cartoonist Jean Plantureux said.

Plantureux, popularly known as Plantu of the French newspaper Le Monde, is president of Cartooning for Peace. He and five other European cartoonists are in the country for a four-day series of lectures, workshops and dialogues with Filipino cartoonists, journalists and students “to promote understanding among different cultures and beliefs using editorial cartoons.”

Alliance Française de Manille director Patrick Deyvant said a dialogue between the cartoonists is important because “they don’t want to offend [with their works]. It’s never [an] attack [on] religion. It’s all about fighting [violations of] human rights, making everybody understand what’s happening.”

Plantu, Danish cartoonist Bob Katzenelson, the Inquirer’s Manix Abrera and freelance cartoonist Rob Cham collaborated on a drawing for the Inquirer, which Plantu said spoke of their love for their Filipino friends.

“We don’t [speak] the same language. I don’t know Tagalog. They don’t know French. Our language is the picture,” Plantu said on Wednesday in an

interview at the Inquirer’s main office in Makati City.

For the next two days, their drawings will be published on the Inquirer’s Opinion page, as part of the paper’s Editorial for a Day Program.

Cartooning for Peace, a network of 130 cartoonists from all over the world, was founded in 2006 by then United Nations Secretary General Kofi Annan and Plantu “to promote a better understanding and mutual respect between different cultures and beliefs using cartoons as a universal language.”

The Philippines is the group’s first stop in Asia. Plantu said they are here to learn and understand the country’s culture.

“Each time [we visit a country is an] opportunity for us to understand what is allowed, what is taboo. We want to continue [drawing] strong cartoons without attacking or offending 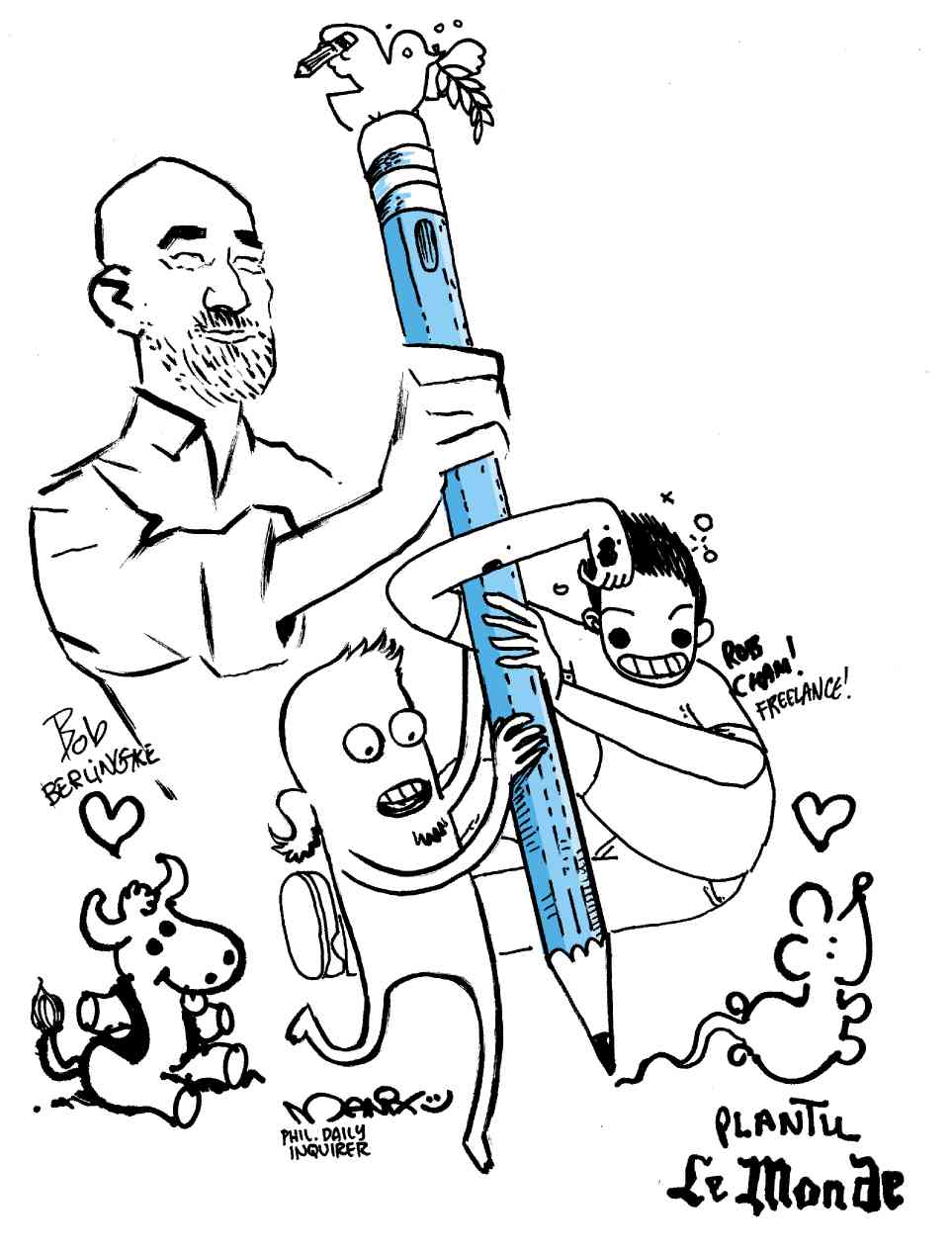 religious beliefs,” Plantu said, alluding to the caricatures of the Prophet Mohammad that backfired on the French satirical magazine Charlie Hebdo four months ago.

On Jan. 7, two Islamist gunmen barged into the offices of the weekly in Paris and killed 12 members of its staff, including editor Stephane Charbonnier, better known as Charb.

The attack sparked worldwide outrage over extremism and a relentless police hunt for the gunmen. Three days later, police killed them in separate confrontations in Paris.

Plantu said the attack on Charlie Hebdo had not affected his work as a cartoonist.

“Nothing is changing. I continue to express my political views,” he said, though adding that he now has two bodyguards.

Katzenelson, vice president of Danish Cartoonists, on the other hand, jokingly said that he walks around the streets of Copenhagen armed “with a nailclipper and a sharpener.”

A freelancer for Berlingske, a major Danish newspaper, Katzenelson said their visit to the country is a way “to find a common ground on how to approach cartooning in the future in the context of helping the peace process or trying to describe or deal with issues related to the peace process here [in the Philippines] and worldwide.”

One lesson learned from the Charlie Hebdo incident was to continue doing their work despite threats of violence.

“We can’t be shut up by people who are trying to stop us with violence. I hope you won’t experience the same in the Philippines. I hope your democracy is solid enough to let you express your opinions through writing, speaking and illustrating cartoons,” he said.

He added that editorial cartoons are part of the democratic process where one can freely express one’s opinion.

“You can deal with difficult topics, such as how you treat gay people, minorities, through cartoons. Cartoons [can make people] see things [and issues] in a brighter light,” he said.

“The job of everybody is to speak with each other with

respect to [the different] religious beliefs. Our job [as cartoonists] is to continue to make very strong cartoons that attack [violations of] human rights,” Plantu said.

He added that if he draws a Pakistani girl denied of education or a priest embroiled in a pedophilia case, it’s not an attack on their religions but on the violation of their rights.

He added that having exchanges with cartoonists from different countries enables them to draw cartoons that are culturally sensitive, especially now that their drawings can be seen in almost all countries.