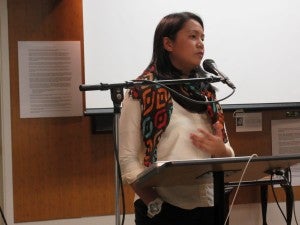 The consulate hosted the screening of ABS-CBN reporter Chiara Zambrano’s two-hour documentary film, “Spratlys: The Islands of Freedom” on the maritime dispute between China on the one hand and the Philippines, Taiwan, Vietnam, Malaysia and Brunei, each claiming the Spratlys and other islands in the South China (or West Philippine) Sea. (Each also has its own territorial dispute with the others.)

“Spratlys” was a finalist in this year’s New York Festivals. Zambrano’s previous treatment of the same issue won Best Documentary at the 2012 Gandingan Awards.

Zambrano said, “I feel personally about it. So little has been told about it, so I made the documentary. It’s a very hard story to tell in the Philippines especially when most people are more concerned about where they will get food. Not a lot of people know about the Spratlys, or even know they exist.” 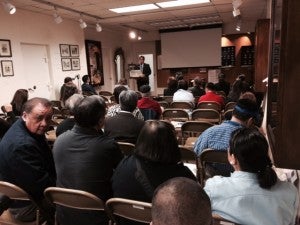 She also said of the more than five decades-old controversy, “It can only get complicated. And most people would probably not see (the islands) in their lifetime.”

“Spratlys” is more commentary than chronicle. It could generate the spark that could ignite enough public uproar. Think Facebook and what happened in Egypt. Nowadays, the first revolutionary shot could be from a digital blast. More so because Zambrano filmed many of the harrowing situations that do not get into the mainstream news in Manila, much less the international press.

Zambrano’s documentary opens with an iconic shot of the Sierra Madre, a re-purposed World War II era US tank landing craft deliberately grounded on Ayungin Shores. The rusting metal hulk is home to nine (there used to be 11) Philippine Marines. And for 15 years it has been the last line of defense against total Chinese take-over. Elsewhere abandoned amphibious landing craft dot the beaches.

The Marines wear US-issue digital pattern camo with Velcro fasteners. But most lose the battle blouse in favor of T-shirts. Beards and non-regulation length haircuts attest to the three-month long postings that extended to five.

It reportedly costs about 90 pesos ($2) to feed a Philippine trooper daily. But the Chinese blockade makes sure it would cost the Armed Forces of The Philippines (AFP) more. The food runs out fast and blockade-running supply ships are few and far in between. Consequently, Marines who hadn’t fished quickly became experts at catching lapu-lapu, labahita, squirrelfish, stingrays and more.

Zambrano caught one of the small but fast Philippine Navy ships on a 30-hour (three to five day trip) supply run from an undisclosed location. She filmed the cat and mouse game that the Philippine Navy and the Chinese Coast Guard ships play on the high seas.

Two hours out of Ayungin Shoal, the big Chinese ships hailed the small Philippine ship, warning them of illegal passage. But the small ship was undeterred, identifying itself and its mission. The Chinese came dangerously close to block the Philippine vessel. An air horn blast was the closest to an offensive fire from the Chinese. But the small ship was faster and more maneuverable. Besides, many of the reefs’ beaches are shallow and could not accommodate the big ships.

The Philippine troops are outnumbered, ill-equipped and low on supplies. But they found that standing their ground is the best deterrent to the Chinese incursion. Better late than never, because in 1995 wooden huts were discovered at Panganiban Reef. The Chinese said they were just sanctuary for fishermen, but in three years the huts became concrete structures. Just last year, the Chinese were already spotted at Recto Bank

But at Parola Island (one of the biggest islands in the Spratlys), Zambrano reported, Philippine troops get a full poignant view of the lighthouse and stone houses at nearby Pugad Island, territory that was snatched away by the Vietnamese.

The frustration of keeping watch over such a wide spread area with some lands not even visible until low tide is shared by the civilian population, said Zambrano. In 2002, the civilian community in the Kalayaan Islands was established at Barangay Pag-asa, the only one in the Spratlys.

Zambrano said it is the poorest barangay, with a population of only 285. But it is the farthest Philippine territory and the nearest to other countries. Bigger barangays with bigger population continue

to outbid Barangay Pag-Asa for community development funds. But somehow Barangay Pag-asa acquired solar panels and street lights, built a school, and even got goats and chicken to seed their eco-system.

But it’s hard to maintain the eco-system when there are Chinese ships uprooting corrals and blasting sand to release hidden clams underneath; or processing turtle meat at sea and just throwing the carcass carelessly overboard. These done right in front of Zambrano’s camera. Zambrano said some of the town officials try to drive out the Chinese, but they just come back when the officials’ boat run out of fuel to chase them. Unfortunately, the underwater detonations have taken their toll and one fisherman told Zambrano there is no fish left. 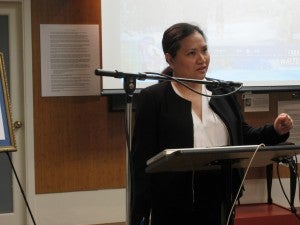 One Marine told Zambrano the isolation and loneliness in the islands can kill you. Whether they’re Royal Marine Commandos or Force Recon, marines of any country are reputedly crack troops. But at Spratlys, the marines noted a few suicides in their ranks. There is only a satellite phone that connects them to the world.

“We don’t have a Jollibee,” says one civilian. Both trooper and civilian pass their days with exercise regimen to outdated music and “tong-its, barbells and Bible.” Meanwhile, the marines hone their battle readiness at rapid response simulations during the Annual General Inspection (AGI). They even have contingent plans to evacuate civilians to the only school and to deny the enemy the radio room in case of a sudden invasion.

Meanwhile, Zambrano said, life goes on in Manila “with them unaware of what’s going on (in the Spratlys).”

East Bay Assistant Professor Maria Ortuoste opined that the Philippines should not totally depend on the US for help over the Spratlys issue. Probably because of history – the US reminded the Philippines that the Spratlys were not included when Spain surrendered the country to the US. Then, after World War II, the US made no mention of the Spratlys so as not to displease Chiang Kai-shek. In recent years, China has become a US partner in business and trade. The US would be hard put to favor a defense ally over a major business partner.

Columnist and lawyer Rodel Rodis countered that the US should take part in denying China the Spratlys precisely because of their business interests. He also said that the almost 18 billion tons of oil and natural gas in the region means that the Philippines doesn’t have to send any worker to the Middle East. The Spratly Island group, he said, is the only thing preventing the Chinese from an unopposed territorial acquisition spree close to Japan and Australia.

Rodis also said that some Philippine senators have a conflict of interest because of their relationship with Chinese election campaign supporters. “The Hague decision (is scheduled on) April 2016. The Philippine elections are on May 2016. The Chinese will just wait until their Philippine politician is in place to retract the country’s claims to the Spratlys,” Rodis added.