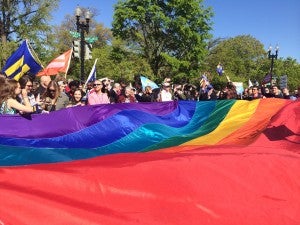 More than 200 civil rights activists, community and church leaders gathered on the steps of the Supreme Court on April 28. A ruling in favor of gay rights is expected in June. PHOTOS BY HUMAN RIGHTS CAMPAIGN

hundreds of others who gathered here on March 25 for a vigil on the steps of the US Supreme Court.  The day before, the nation’s high court had heard oral arguments about same-sex marriage. President Obama hailed the court’s ruling, handed three months later, as “a victory for same sex couples who have long fought for equal treatment under the law.”

This week, de Guzman was back

again on the steps of the Supreme Court, holding a hand-made sign patterned after the Philippine Flag which read, “Pinoys for Marriage Equality.” On April 28, the court listened

to oral arguments on whether states can ban same sex marriage. A ruling in favor of gay rights, expected in June, has the potential to bring marriage equality to all 50 states. Today, 37 states, including the District of Columbia, have legalized same-sex unions. 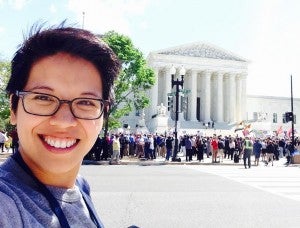 Her fourth time participating in a rally in front of the Supreme Court, Hyacinth Alvaran joins hundreds of others advocating for gay rights.

gay man, I cheered the 2013 Supreme Court’s decision to strike down a key part of the Defense of Marriage Act (DOMA), which says marriage is only between a man and a woman,” de Guzman recalled.

and family,” he added.  I think that in a time where so much is happening in the world, with racial tension in Baltimore, people struggling in the aftermath of disaster in Nepal, Filipinos need to step

forward on all these issues in solidarity.”

De Guzman was co-director from 2010-2014 of the National Queer Asian Pacific Islander Alliance (NQAPIA), a federation of LGBTQ grassroots organizations formed to challenge homophobia, racism and anti-immigrant bias. A prominent leader in the Filipino World War II veterans ongoing campaign for justice and recognition, he is currentl managing coordinator for the Diverse Elders Coalition.

Etcubanez said she was thrilled to join the hundreds of demonstrators at the Supreme Court “because I believe that everyone should have the right to marry. And I believe that people deserve the stability that comes with knowing that their marriages will be valid

under law everywhere, and not dishonored depending on what state they happen to live or work in. I wanted to stand with and for friends

and loved ones to show my support for marriage equality. Just like our placards stated, ‘love is love.’ It’s simple really.”

Prior to joining AAJC, Etcubanes was director of legal services for the Asian Pacific American Legal Resource Center in Washington, DC. She has had 10 years of experience helping low-income communities, including advocating on behalf of labor pool workers in Baltimore, scene of recent riots following the death of a Black man in the hands of police.

Alvaran, who serves as co-chair of Asian Pacific Islander Queer Sisters (APIQS), demonstrated in front of the Supreme Court three others time in 2013:  the hearings on DOMA; California’s Prop 8 (banning same-sex marriage) and the Voting Rights Act in Shelby County v. Holder.

“When marriage equality happened, I felt like I was actually included for the first time,” she said in an interview five years ago with MetroWeekly, a LGBT magazine. ”It was like a weight was lifted off of my shoulders. It was so empowering. I just felt so free

and I walked around the city with this confidence that I hadn’t had before.”

”I want to see us living happily and openly

when, for example, I’m talking to another Filipino woman who reminds me of my grandmother or my aunt. I think if we grew up feeling ashamed, then we don’t want to be in those spaces again. And we leave, and we don’t want to come back

The historic gains of the gay rights movement over the last two decades are a source of pride to these Filipino American activists who have been on the trenches “moving the ball forward.” De Guzman recalled that when the National Federation of Filipino American Associations (NaFFAA) was formed in 1997, youth delegates tried to include gay rights in NaFFAA’s agenda. They were rebuffed and their proposed resolution had to be tabled.

to see the Filipino American community ‘evolve’ over the last 18 years since NaFFAA was formed, from an organization where even what seems now like a lukewarm statement of support for LGBT rights was controversial to a space that openly

welcomes and honors the LGBT advocates in our midst,” de Guzman recalled.

He notes that openly

gay activists like Jose Antonio Vargas and labor leader Greg Cendana, have been warmly embraced today by the Filipino American community, featuring them as keynote speakers in national conferences and gala balls.

“I’m struck by the irony that this [Supreme Court hearing] happens on the week before the Manny Pacquiao fight and that many of the allies that support me and the Filipino LGBT community will be among his loudest supporters, even though he does not support my full equality,” de Guzman pointedout. “My hope is that the success he finds in the ring and elsewhere will put him in more contact

with people that can help find him success in ‘evolving’ his views on marriage equality and other issues.”

“That’s why the work is never finished,” Alvaran says.  “Part of the work is about passing good laws and protecting our rights. The other part is about changing hearts and minds: helping people see our common humanity as we see our differences. We all deserve to love and be loved, to be with our families and provide for them through our jobs

, to contribute fully to our communities and not be scared of losing our lives when we walk down the street, to be rendered services whether we’re in a restaurant or at a hospital. As a Filipina, American, immigrant, lesbian and woman, I want these things for myself. I think that any community does.”

Read Next
Fil-Am, Fil-Canadian Pride and gloom over Manny-Floyd outcome
EDITORS' PICK
Nograles: Cabinet members to donate 75% of monthly salary to aid COVID-19 fight
Quick chat with Nicole Andersson: ‘You really don’t need much to be happy’
IATF to LGUs: Issue ordinances vs attacks on frontliners, COVID-19 patients
Diokno to Duterte: OK to make fun of buck tooth, but focus on people’s needs first
Robredo spox thanks Duterte for defending VP’s efforts vs COVID-19
10 Filipinos positive for COVID-19 in UK, 7 in Ireland — envoy
MOST READ
Gov’t mulling quarantine period extension of 15-20 more days
Sotto on Isko Moreno’s call: We do our job without the media following our every move
ADB warns PH against prolonged lockdown
Cook more and eat less: Tips on your quarantine diet
Don't miss out on the latest news and information.