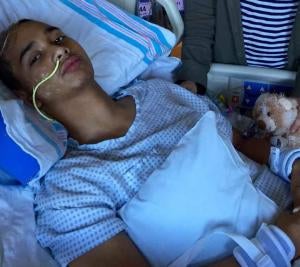 Mauling victim Christian Rasner is now out of the hospital but must undergo long rehabilitation. INQUIRER FILE PHOTO

out of the hospital where he was confined since March 11 after sustaining a brain injury.

“Christian woke up on March 30 and he readily recognized us, his family,” said his mother, Maria. “He   doesn’t remember many things though he was even wondering why he was in the hospital. He was uncomfortable because of the breathing tube.”

Christian also lost his voice after waking up, but can now speak and eat regular food. He lost 40 pounds from the ordeal. He will continue his rehabilitation at home after his release from the hospital last Thursday, April 23 although his doctors have not yet given a time frame for full recovery.

Christian was brutally attacked by two males without provocation at the parking lot of the Westfield Valley Fair Mall in San Jose on March 18.

“Christian may now be out of the hospital but after the surgery, his brain activity has never been the same,” Maria Rasner explained. “Christian’s neurosurgeon told us never to leave him alone because once he suffers from seizure, a common effect of brain injury, with no one in sight to help and his head hits the floor again, that can be very dangerous.”

Part of skull not yet reattached

Part of his skull at the back of his head has not been put back yet to give more space in case swelling happens again. His neurosurgeon will return the bone back on his head by July, “in yet another surgery that makes Christian very nervous,” Maria said.

Because of the injury, Christian cannot even spell his name right at present and his vision was impaired after a brain tissue affecting his eyesight was taken out.

He is currently undergoing occupational, speech and physical therapies at home and is also about to start his mental therapy to recover from the trauma he experienced.

As this developed, one of the attackers identified as San Jose resident Troung Son Huynh, 25, who was arrested and charged with felony battery was able to post bail and is now out of jail, something that hurts the Rasner family more. The other suspect was not charged because he is minor.

“They robbed Christian of his future and now they are both free. We are aware that everyone has the right to bail but just the same, knowing they were able to go free, despite what they did to my son pains us,” Maria admitted. 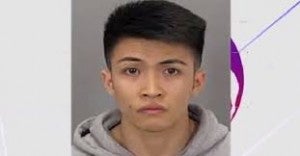 One of Rasner’s suspected attacker Troung Son Huynh is free on bail.

To add insult to injury, Maria recently learned that her mother’s application for an emergency humanitarian

visa was denied by the US embassy in Manila.

Grandmother Jholina Gelotin of Cavite was trying to join her daughter and grandson in Milpitas to lend physical and emotional support to the Rasner family while they recover from what happened to Christian.

“My mother called us Monday morning Philippine time crying after the visa denial,” Maria recounted. “We were counting on the assistance she can provide because I also have to take care of our other two younger kids aside from Christian. She could have been a big help to us emotionally after all what we have been through and continue to suffer from.” 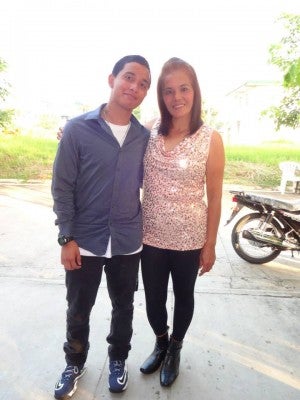 Christian himself was distraught upon learning that his grandma whom he wanted to see again may not be able to make it.

Maria cannot believe that despite all their efforts in providing supporting papers, including a letter from Congressman Mike Honda

to US Ambassador to the Philippines Philip Goldberg, her mother’s bid for a visa failed.

Among the documents they submitted were present pictures of Christian with breathing tube, newspaper clippings of what happened on that fateful Wednesday night of March 11, a statement that Gelotin would not be a burden to the government and that she would stay with the Rasners in Milpitas and letters from his doctors and even from the Sta. Clara Valley Medical Center administration on Christian’s conditions and needs.

“We are seeking help from whoever gets to read what happened to us and learn what we are going through particularly with what my mother had gone through in the embassy in Manila,” appealed Maria.

“Through your publication, someone may be able to help us and my mother still get a visa to see and help Christian. We did what we can from our end. I wonder if the embassy people really read the supporting papers we submitted.”

In denying the visa application, the US Embassy officer wrote that Gelotin was ineligible for a nonimmigrant visa as she was not able to demonstrate that she has strong ties in the Philippines that would compel her to go return to her home country. The decision cannot be appealed, but a reapplication is allowed.