Mary Jane Veloso: ‘If God wants me to be alive, I’ll live’ 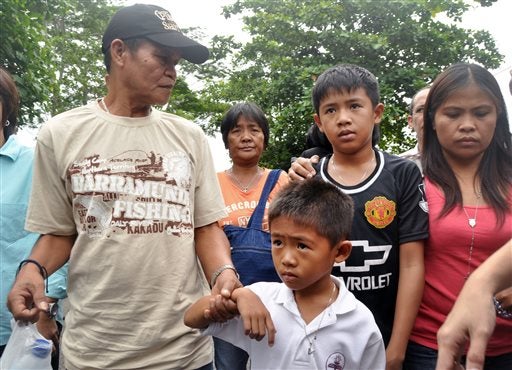 The children and other family members of Mary Jane Veloso. AP FILE PHOTO

Those were the ecstatic words from Mary Jane Veloso’s eldest son, 12-year-old Mark Daniel ,when he heard the news that his mother’s execution was suspended past midnight.

Celia Veloso, mother of the 30-year-old Mary Jane, heard the boy, who was with them in Indonesia, shouting in joy while they were on their way to Jakarta to prepare for the worst.

“We too were overjoyed,” Celia said  in an interview on DZMM hosted by DJ Richard.

She added: “I now believe in miracles. “

According to Mary Jane’s mother, they learned about the Indonesian government’s decision to postpone the execution from officials of the Department of Foreign Affairs.

“Nasa sasakyan kami…may humahabol sa aming isa pang sasakyan ‘yun pala taga-DFA para sabihing buhay si Mary Jane (We were on a vehicle …another vehicle was chasing us and they turned out to be people from the DFA to tell us that Mary Jane is alive), she told DZMM. AC