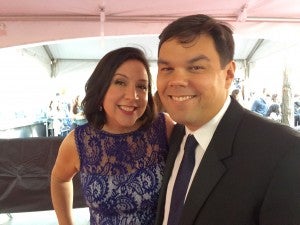 “I still don’t know why I made the list,” the 68-year-old fashion icon, who is originally from Belgium, told Manila Mail as she was escorted to the Jazz at Lincoln Center, home of the magazine’s annual gala for the world’s most influential people.

According to Kang Cheol-hwan, executive director of the North Korea Strategy Center and author of Kim’s TIME 100 profile, the North Korean leader’s international exposure had raised hopes of modernization in their home country. However, with systemic repression continuing in North Korea, “those hopes have gone unfulfilled,” Kang said.

“We’re happy and excited to be back,” Lopez, EGOT award-winning composer of “Let It Go” (from Disney’s “Frozen”), told this reporter. “It’s a really cool party.”

The power duo said they’re a bit relaxed this year since they will get to enjoy the “toast.”

“Last year we gave a toast, and we’re enjoying the fact that this year we got to just drink the toast,” said Anderson.

The stand-up comedian faked a stumble in front of the couple, succeeding to ruin their red carpet moment as shown by photos of West’s annoyed look, which went viral on social media.