Feds urge immigrant victims of scams to speak out 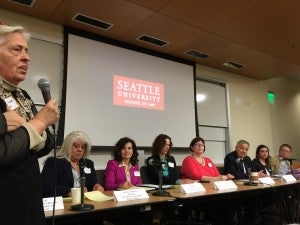 SEATTLE, Washington — The call came in on his business phone last month. It was about 4:00 p.m., Kye Lee remembers, when the caller — a man who introduced himself as a Public Utility District (PUD) agent — was demanding that he pay $621.56 for unpaid electric bills.

“If I won’t be able to comply with the payment

right away,” Lee said, “he told me that my electricity would be cut off in a few minutes.”

Baffled, the 64-year-old Korean immigrant says he had to stop what he was working on at that moment in his grocery

store in Mountlake Terrace. How could that happen, he asked himself, when he knew he paid the previous bill on time.

“I have never been late paying my utility bills for seven years [since I have had my business],” Lee said through a translator

. “But I believed the caller because he gave me a precise amount.”

immigrants, like the one that Lee had fallen for, has become more widespread in many cities and states across the country.

In Washington, scammers – from notarios (notary services) and lending companies to debt collectors and merchandise businesses

— prey on immigrants who may be more vulnerable to their ruses because of limited English-language proficiency, or who are oblivious to fraud schemes.

to Charles Harwood, northwest regional director of the Federal Trade Commission (FTC), more than 100 cases of customer fraud were filed nationally in court last year. Most of the scammers seemed to have credible and legitimate business operations.

The FTC and other law enforcement agencies, Harwood says, received 2.6 million scam-related complaints. Most of these complaints, which did not include the ones in the Do Not Call registry

, were from US consumers, while a few were from consumers based abroad.

The Do Not Call registry

is a list that consumers can join to lessen unwanted telemarketing calls to their home and cell phone numbers. Consumers can register

their phone numbers at no cost for five years to stop telemarketers from calling, unless the telemarketer has written permission.

With the use of advanced technology, particularly the Internet

, to get background information on consumers, scammers have become more sophisticated and convincing, investigators say

this. But we can’t [solve this] without the help from the [ethnic] media that report for these communities. We really, really need your help.”

Encouraging people to speak out, especially those who have fallen victims, Harwood added that it is important to “let the consumer advocates and law enforcers” know how they can help when the problem occurs.

“We can’t just be quiet when we’re victims of scams because we won’t be able to know about it,” he said

As for Lee’s case, the fake PUD agent insisted that in order to continue

having power at his store he had to pay at least $450. Although Lee said that the checks

that he sent previously to PUD went through, somehow the scammer convinced him to follow what he was told to do. 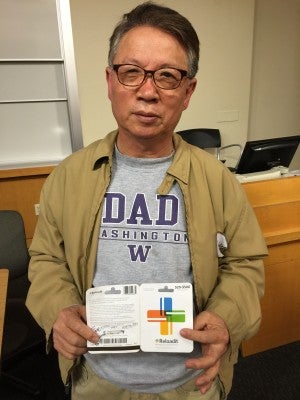 Storeowner Kye Lee was a scam victim who reported it to authorities.

“I asked the caller, ‘Why this is such a short notice?’ And he told me that a previous notice was sent in the mail two days ago, but I failed to respond,” Lee said. “He even told me that I was lucky to have been given a day-long extension.”

Lee was then instructed to go to a nearby Albertson’s Supermarket and buy a prepaid card called Reloadit to pay his bills. After the purchase, he called the bogus PUD agent and gave the prepaid number on the back of the card.

Then, when he asked for a confirmation

receipt, he never heard back from the caller. Lee informed the PUD and was told that he got scammed.

“I felt helpless,” he said.

in Washington, DC, said that for most victims  “the call feels very personal” and so it is easy to believe them.

“Even if the call is random, as a lot of them are, the victims say it feels like ‘they know me,’ because they have some information about them,” she said.

The victims, Leach said, may be in denial when it happens to them. But she says that by speaking out to authorities, it would help a lot to expose the fraud.

“Scammers are professionals,” she added. “It’s their job to get your

information, to get your money — and they are very, very good at it.”

Based on studies, according

to Leach, there are two ways to avoid being a victim of scams: 1.) Talk to anyone about the offer; and 2.) Take your time before you make any decision.

“There’s something about it when you say it loud, and it doesn’t matter whom you talk to about it,” she added. “The scammers want to take your money as fast as they can. So if you make it longer for them, they may also move on.

Many undocumented immigrants victimized by scams, however, don’t report

to authorities. They are afraid that it would alert the government about their immigration status

Scams, warned Shannon Smith, consumer protection division chief of Attorney General’s Office in Washington, “involve all aspects of economy – from mom-and-pop shops to very large corporations,” and so awareness from immigrant consumers is the key to avoid being a victim.

,” she said. “If you know someone who was a victim of scam, family or friends, it is important to tell us. “That person was not the first, and I am afraid, won’t be the last.”

In Yakima Valley, about two hours away from Seattle, notario publicos – which are mostly unlicensed immigration assistants – have been reportedly targeting

undocumented farm workers who seek to live legally in the United States.

“I have seen thousands of farm workers who have been impacted by notarios,” said Laura Contreras, an immigration attorney for Northwest Immigrant Rights Project. “Many of these are actually trying to do good, but they do more harm in the end.”

on Deferred Action for Childhood Arrivals (DACA), Contreras recalls, some of the notarios in the valley started charging $100 just to get the form, which can actually be downloaded

“Notarios are long-timers – and they even advertise,” she said. “Some of them may file an application

for immigrants, but others won’t even mail the application.”

Lai cited a Vietnamese man who posed as a USCIS officer, falsely promising other Vietnamese immigrants that if they pay, the process

of their applications to become a naturalized US citizen would be expedited. Several dozen Vietnamese immigrants lost about $100,000 to this scam.

But can victims get restitution for the money they have lost?

While the FTC does not handle individual cases, Harwood says that the agency has been able to get some of the money back for the victimized consumers, as part of a lawsuit against the scammers.

Last year alone, Harwood added that through the FTC’s law enforcement efforts, there were about 740,000 consumers who received more than $65 million in restitution.

Some of the victims, however, may not be able to get the full amount they lost and “it may take two to three years” for a lawsuit to be completed.

“Even if, say, they only get half of their money back, I believe that justice has been served for them,” Harwood said.

For Kye Lee, his experience with a scammer has made him more determined to help increase awareness in the immigrant communities.

“As a victim, I feel humiliated and frustrated. It’s really difficult to get fooled,” Lee said. “But I know better now, and I will do what I can so people would not experience what I had.”

This story is part of a series of ethnic media roundtable discussions on consumer scams across the United States, conducted by New America Media, in partnership with Federal Trade Commission and other law enforcement agencies.