Wesley So out of $1M-plus Grand Chess Tour

— Grandmaster Maxime Vachier-Lagrave of France was added April 26 as ninth and last player in the super chess circuit starting June 15, which brings together three of the world’s strongest chess tournaments.

Ranked No. 7 in the world, Filipino Wesley So is a natural fit for the tournament

, but organizers did not officially say if he was invited, and if was, why he declined to participate.

Called the Grand Chess Tour, the circuit will feature the Norway Chess set in Stanger June 15-26, the Sinquefield Cup in Saint Louis, August 21 to September 3 and the London Chess Classic, December 3-14.

The world’s top chess players, including world champion Magnus Carlsen and five-time champion Vishy Anand are competing in the tour that offers

pot of more than $1 million.

An informally designated media liaison in Manila said So was invited but could not make it due to prior commitments, which are in conflict with the schedule of some of the legs of the tour.

“Because of prior commitments to a four-game match

with David Navarra plus simultaneous exhibitions in the middle of the match, he (So) now has a scheduling conflict with Norway Chess,” the media liaison said in a Facebook posting. 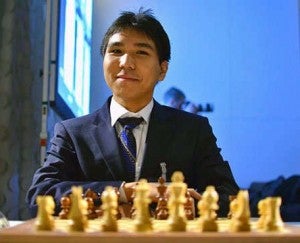 Grandmaster Wesley So most likely will miss out on the Grand Chess Tour.

“Influential people” are trying to work out a plan so that So can still play in Norway, the liaison added.

“Team Wesley is still hoping that the re-scheduling can be worked out. If not, So will have to honor his commitments and skip Norway Chess this year,” the liaison, who acts as virtual spokesman, said.

Other than Lotis Key, a personal chaperone who is introduced as So’s “mother,” no member of “Team Wesley” is publicly known.

No re-scheduling was presumably worked out as Grand Chess Tour organizers picked Vachier-Lagrave as the ninth player.

Each tournament can add a 10th player, but the nine are permanent participants

Each of the three tour event will award individual prize funds of $300,000, with competitors also tallying points toward a tour prize fund of $150,000.

The participating players are:

Former world champion Vladimir Kramnik of Russia was invited but declined, citing prior commitments and his desire to spend more time with his family.

” I have actually a lot of invitations already

this year. (…) Taking three more tournaments would just make it so totally packed and full, that I’m afraid first of all that I would not see my family for the whole year,” Kramnik said in a statement.

“The Grand Chess Tour was created with just one goal in mind: Demonstrating the highest level of organization for the world’s best players,” said Tony Rich, executive director of the Chess Club and Scholastic Center of Saint Louis

It was Rich, the chief arbiter in the US Chess Championships who slapped So with a forfeit in the 9th round for writing notes to himself on a piece of paper in violation of tournament

Organizers did not say that this has something to do with So’s not playing in the tour, but rules include the phrase, “players that demonstrate the highest levels

of sportsmanship and professionalism.”

” We invited the top-10 players in the world, eight of whom have confirmed

their participation,” Rich said, adding that the players were selected based on the January 2015 FIDE ratings.

“I guarantee the tour will be an extremely high-quality event,” said Rex Sinquefield, the man behind the Sinquefield Cup and all other chess activities