So loses again; Carlsen pulls away in Gashimov Memorial chess 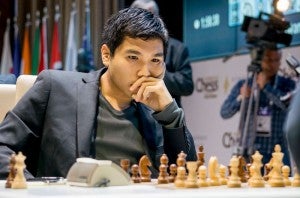 Wesley So analyzes his losing game in the 7th round against Fabiano Caruana in the Gashimov Memorial chess tournament in Azerbaijan. PHOTO BY SHAMKIR CHESS 2015

LAS VEGAS, Nevada — World champion Magnus Carlsen appears to be pulling away with another key win in the Gashimov Memorial chess championships in Azerbaijan.

Wesley So lost again, this time a victim of Fabiano Caruana’s endgame brilliance in the seventh round of the 100,000-euro chess tournament.

Despite the loss, however, the 21-year-old So remains a contender as he stayed tied for third and fourth places with Caruana, each with four points.

“There were many ways to win,” said Caruana, the No. 2 in the world, who carried a kingside two-pawn advantage into the end game.

Although So also had three pawns against one for Caruana in the queen side, he could not come up with the precise counter-play with the Italian’s bishop proving more potent than his knight.

The end came after 52 moves of a Nimzo-Indian, in which Caruana said So appeared not very familiar.

It was the second consecutive victory for Caruana, who took out Kramnik in the previous round, and appears to be mounting a challenge to Carlsen.

Caruana is best known for putting together six straight wins against a strong field that included Carlsen in the 2014 Sinquefield Cup in Saint Louis.

In the mix is five-time world champion Vishy Anand of India, who is trailing Carlsen, at second, with 4.5 points.

Anand beat Michael Adams of England in the seventh round.

For So, it does not appear to be getting any easier, the rest of the tournament.

In the eighth round, he will face Carlsen, although he has the slight advantage of playing with the white pieces.

In their first-ever meeting this year, So pulled out a draw against the Norwegian champion, although Carlsen admitted he was outplayed in the middle game.

For his final game Sunday, So will play black against Maxime Vachier-Lagrave of France.