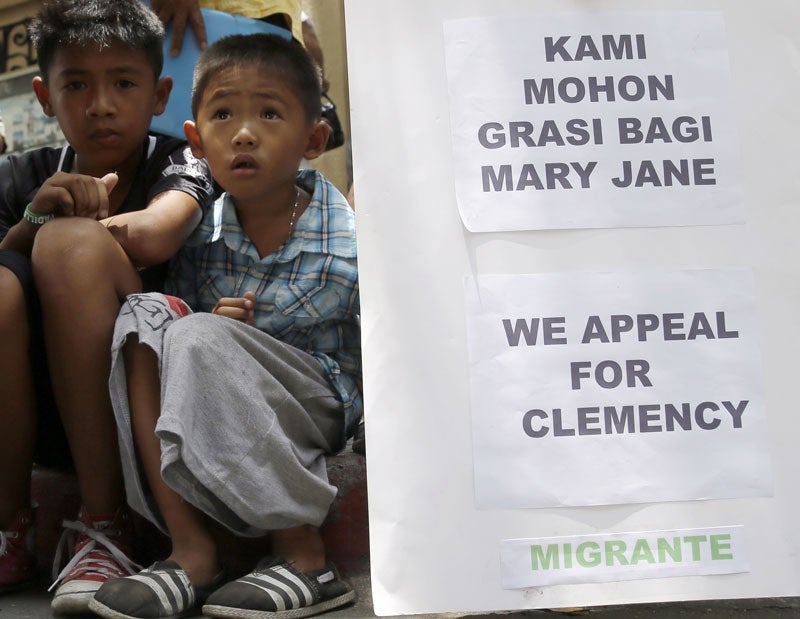 Brothers Mark Daniel, left, and Mark Darren Veloso, children of convicted drug trafficker Mary Jane Fiesta Veloso, wait outside the Indonesian Embassy at the financial district of Makati city, east of Manila, Philippines as their grandmother Celia delivers an open letter addressed to Indonesian President Joko Widodo Wednesday, April 8, 2015. In the open letter, the Veloso family is asking for clemency to save the life of Mary Jane Fiesta Veloso who was convicted for drug trafficking in Indonesia and is sentenced to be executed after her appeal was rejected by the Indonesian Supreme Court March 26. (AP Photo/Bullit Marquez)

Filipina deathrow convict Mary Jane Fiesta Veloso will reunite with her children and parents Saturday after Indonesian authorities allowed her  immediate family’s first visit to Nusakambangan, known as Indonesia’s execution island where inmates are about to face the 12-member firing squad.

The family, lawyers, and embassy officials will travel from Yogyakarta to the port area where they will take a 15-minute boat trip to the island, Edre Olalia, secretary general of the National Union of People’s Lawyers and   one of the private counsels of Veloso presently in Indonesia.

“This is a reunion of the family. We will give the family enough time to be with Mary Jane,” Olalia said in a phone interview

The Indonesian government allowed Mary Jane’s children Mark Daniel and Mark Darren, her parents, and her sister, along with two lawyers and Philippines embassy officials to visit Veloso in the Central Java island from  9 a.m. to 5 p.m.  (Central Java time).

The lawyers of Veloso will also maximize a one-on-one private and confidential talk with her for any information that will help the Philippine authorities run after “the real perpetrators,” those behind the smuggling of the 2.6 kilograms of heroin found in her luggage in 2010 while she was traveling from Kuala Lumpur to Yogyakarta.

Past  midnight  on Friday, the family of Veloso received the order of execution from Attorney General’s Office of Indonesia.

The letter dated April 23 instructed prosecutors to prepare for the execution of 10 convicts including Veloso.

“The order of execution was acknowledged by the family but family members didn’t agree with what was stated in the order,” Olalia said.

He clarified that there is no fixed date for the execution yet as Indonesian protocols require a 72 hours’ notice.

While Veloso’s lawyers filed a second appeal for a judicial review  on Friday, it may or may not stop the implementation of the order of execution.

“There is a possibility that the execution will not be carried out until   the case has not been concluded,” Olalia said.

The second appeal provided new arguments for the commutation of the sentence of Veloso from death to life imprisonment.

“The court was not able to prove that Mary Jane was a drug courier. She was in possession of illegal drugs without her consent, knowledge and   the intention of smuggling, selling them,” Olalia said.

Since it was a case of possession of illegal drugs, the sentence should be life imprisonment.

Another ground for a judicial review was the information–backed by the report of the Philippine Drug Enforcement Agency who went to visit Veloso earlier this month–that she was a victim of human trafficking.

“Victims of human trafficking according to international conventions being followed by several countries are mandated to be protected and not to be charged and punished. She should have been brought back to the Philippines,” Olalia said.

Profiles of foreigners on death row in Indonesia