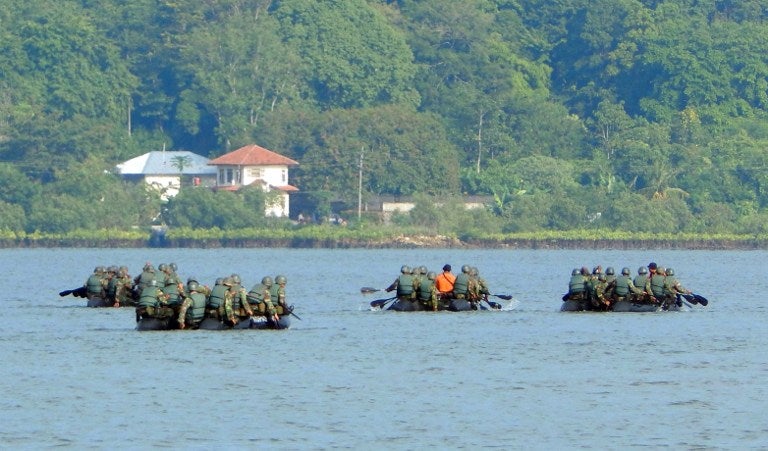 JAKARTA–Relatives and diplomats rushed to an Indonesian prison island on Friday ahead of the looming executions of nine foreign drug convicts who are set to be shot in defiance of international outrage.

Indonesia has advised consular officials to go to Nusakambangan, the high-security prison island where its executions are carried out, and where all of the death row convicts have now been transported to.

The government said an exact date for the executions could not be decided yet, as a judicial review was still pending for the sole Indonesian in the group of 10 people who face death by firing squad.

“We hope that the decision will be made as soon as possible so that we will have a chance to determine the D-Day of the executions,” Tony Spontana, spokesman for Indonesia’s attorney-general, told reporters.

“The theme of the impending executions is a war against drugs,” he stressed, while indicating that more than the legally required minimum notice period of 72 hours might be given to the foreign embassies.

BACK STORY: Indonesia orders execution of Veloso, 9 others

Chinthu Sukumaran, whose brother Myuran is one of two Australians in the group on death row, was making last-minute arrangements to leave for Jakarta.

“I can’t believe this is it. We still haven’t given up hope,” he told the Sydney Morning Herald.

Michael Chan, whose brother Andrew faces death too as a fellow ringleader of the “Bali Nine” heroin trafficking gang, was also heading to Indonesia, the newspaper said.

Consular staff assisting a Brazilian convict were told by Indonesian authorities to be in Cilacap, the port town nearest Nusakambangan, on Saturday.

Lawyers for the two Australians were to meet Australian embassy officials in Cilacap Saturday as Canberra said it was “gravely concerned” at the signs that the executions are drawing near.

“Our ambassador in Jakarta is currently engaged in making a series of representations,” Australia’s Department of Foreign Affairs told AFP in a statement.

The foreigners — two from Australia, one each from Brazil, France and the Philippines, and four from Africa — have all lost appeals for clemency from President Joko Widodo, who argues that Indonesia is fighting a drugs emergency.

One of the convicts was previously identified by the Indonesian government as Ghanaian, but Spontana said he was in fact from Nigeria, along with three other Nigerians in the group.

Mary Jane  Veloso, a Filipino maid whose two sons aged 12 and six have come to spend her final hours with her, was transferred Friday morning under heavy police guard to Nusakambangan, sparking protests in Manila.

Her lawyers filed another court bid to halt the process, as the Australians have been doing. But Indonesia says all judicial reviews and appeals for clemency have been exhausted, and that such attempts are merely delaying tactics.

“Maybe, the best we can hope for is a commutation of the death sentence,” Philippine foreign affairs spokesman Charles Jose told reporters in Manila.

Vice President Jejomar Binay said he appealed again for clemency for  Veloso during a meeting with his Indonesia counterpart, Jusuf Kalla, on Thursday.

“I appeal to you on considerations of compassion, and assure you that the Philippine government is exhausting all avenues to ensure that proper justice is served to those responsible for deceiving Mary Jane into having brought the drugs into Indonesia,” Binay said, quoting from a written appeal he handed to Kalla.

France on Thursday accused Indonesia of “serious dysfunction” in its legal system that led to Frenchman Serge Atlaoui being sentenced to death, and said his execution would be “incomprehensible”.

Velosa’s plight has been keenly felt in the Philippines, were around 100 protesters carrying “Save the life of Mary Jane” signs in the Bahasa Indonesia language picketed Jakarta’s embassy in Manila.

“Mary Jane doesn’t have that much time. The (Philippine) government must show determination to save her from death row,” Garry Martinez of the emigrants support group Migrante told AFP.

Veloso  claims a family friend, working with an international crime gang, had secretly stashed heroin in her suitcase when she was arrested at Yogyakarta airport in 2009.