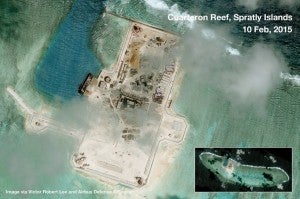 The Armed Forces of the Philippines has accused China of being “aggressive” in challenging a Philippine patrol aircraft in West Philippine Sea (South China Sea) early this week.

But Cabunoc said the Philippine troops will not back down despite the Chinese aggressive actions.

The sea vessel was not identified by the Philippine military.

The military earlier denied reports that the Chinese vessel fired illumination rounds on a Philippine aircraft.