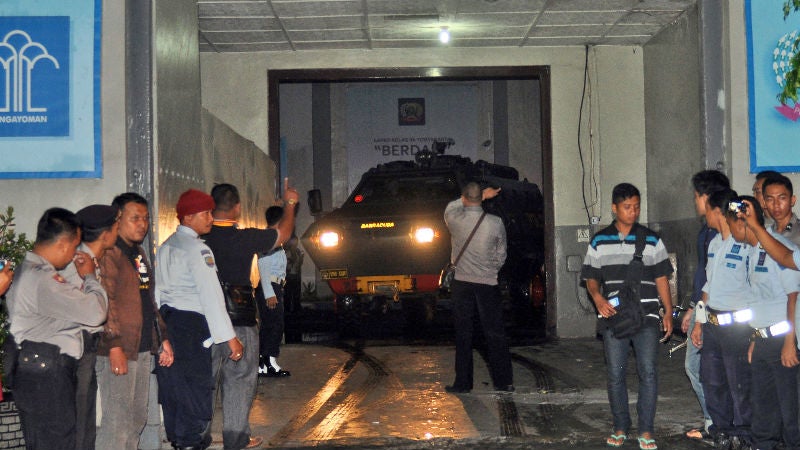 Police officers direct an armored car leading a convoy of vehicles believed to be carrying Filipino woman on death row for drug offences Mary Jane Veloso as it leaves Wirogunan Prison in Yogyakarta, Indonesia for the prison island of Nusakambangan, early Friday, April 24, 2015. Veloso is among foreign drug convicts who are facing imminent execution despite international appeals for clemency. (AP Photo/Slamet Riyadi)

JAKARTA, Indonesia— A Filipino maid facing the death penalty after being convicted of drug trafficking has been moved to an island prison in Indonesia where the execution will take place.

An armored personnel carrier and a car were seen arriving at a port Friday for the short trip to Nusakambangan island, and prison officials said Mary Jane Veloso was inside the car.

Veloso is among 10 drug smugglers whose planned executions last month were postponed due to last-minute appeals. The others are three Nigerian men, two Australian men, a man each from Brazil, Ghana, France and Indonesia.

Indonesian officials have not said when the executions, by firing squad, will take place. Indonesia has vowed to carry through with the executions despite various appeals from the countries of the convicted.