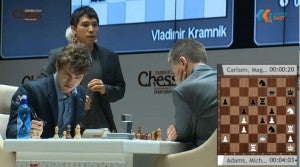 in Azerbaijan. PHOTO BY SHAMKIR CHESS 2015.

, Nevada — Continuing his hot streak, Wesley So outclassed grandmaster Rauf Mamedov in the fourth round Monday to grab the solo lead in the 100,000-euro Gashimov Memorial chess super-tournament in Shamkir, Azebaijan.

The 21-year-old So, playing with the white pieces, handled the intricacies of a complicated middle game and showed precision in a pawn and rook end game to prevail in 41 moves of a Sicilian Defense transposed into a Queen’s Gambit Declined.

It was the third win

against a draw for the Bacoor, Cavite native, to show the way in the nine-man tournament, half-a-point ahead of world champion Magnus Carlsen, who settled for a draw of his fourth-round game — as did all the other players.

Next up for So in the fifth round today is Anand, who is tied for fourth and fifth places with Vachier-Lagrave, the French champion, each with two points.

So is leading a reigning world champion and two former world champions in a remarkable performance for the second youngest player in the tournament.

At 20, Giri, of the Netherlands, is the youngest player.

In an interview after the game

, So said that his disappointing results in the US Chess Championships in Saint Louis, “motivated me to work harder.:

” I was trying to figure out why that happened and what my weaknesses are and I tried to solve them – it’s daily work,” he said.

He said that he has a lot of critics and people not wishing him well.

” I just decided to completely forget about what anybody says and focus on my games,” So told chess24.com.