With time running out, the family of Mary Jane Veloso, who is on death row in Indonesia for alleged drug smuggling, has intensified their appeal to the Aquino administration to arrest her illegal recruiter and save the overseas Filipino worker (OFW) from execution. 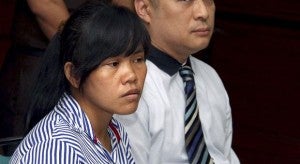 Mary Jane Veloso, who is on death row in Indonesia for drug offenses, attends a hearing in Yogyakarta, Indonesia, on March 4. AP

Tintin or Kristina Sergio is the recruiter of Veloso who, according to the family, remains free in Talavera town, Nueva Ecija province.

Veloso’s father believed that Sergio was a part of an international drug syndicate and urged the Philippine government to arrest her before she could victimize other Filipinos who want to go abroad.

During the Veloso family’s visit to Indonesia on February, her father said Mary Jane was hopeful she would not be subjected to execution and be eventually released from jail.

In 2010, Veloso was arrested at Yogyakaarta airport in Indonesia after authorities found packs of heroin weighing 2.6 kilograms hidden inside her suitcase.

According to her father, they were not in favor of Mary Jane working overseas.

“Don’t go there. Our life here is enough,” her father recalled telling her.

But according to him, his daughter insisted.

He said Mary Jane only wanted to provide a better life for her parents and two children.

The appeal of the Veloso family was supported by the League of Filipino Students (LFS), National Union of Students of the Philippines and the College Editors Guild of the Philippines (CEGP) who joined the family in the press conference at UP campus in Diliman.

The labor group Migrante International also suported the Veloso family. Mary Jane’s sister, Maritess Laurente, on April 17 flew to Indonesia to meet with the Indonesian lawyer of Veloso and the officials of the Philippine Embassy there.

Veloso was supposed to be executed in a firing squad on April 10 but it was postponed until all legal procedures were completed. RC