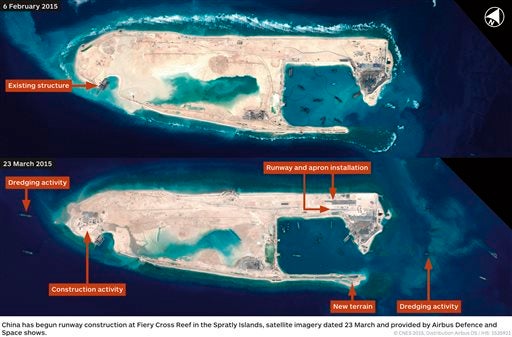 This combination photo of satellite images taken on Feb. 6, 2015, top, and March 23, 2015, bottom, by Airbus Defence and Space, and distributed by IHS Jane’s Defence Weekly, shows what IHS Jane’s describes as an airstrip on Fiery Cross Reef in a disputed section of the South China Sea. The US has warned that China’s development on the artificially created island could raise tensions in the area. (CNES, Airbus Defence and Space/IHS Jane’s Defence Weekly via AP)

BEIJING — China is building an airstrip on an artificially created island in a disputed section of the South China Sea, according to independent analysts, a move the US has warned could raise tensions in the area.

READ: In photos: China’s construction of military bases in Spratlys

Defense group IHS Jane’s said satellite images of Fiery Cross Reef (Kagitingan Reef) taken March 23 show a runway more than 500 meters (about 550 yards) long as well as paved sections of apron. The US says China is carrying out eight such land reclamation projects in the area.

Jane’s said the island is already big enough for a runway 3,000 meters (9,500 feet) long that would be able to accommodate air force planes. China already operates a runway on Woody Island to the west of Fiery Cross Reef, which is also claimed by Vietnam, the Philippines and Taiwan, and another island it is creating could also be big enough to accommodate a runway.

The airfield construction also was mentioned by the commander of U.S. forces in the Pacific at a congressional hearing on Wednesday. Adm. Samuel Locklear said the reclamation work would allow China to exert more influence in the contested region and possibly deploy military assets such as long-range radar and advanced missile systems.

China claims virtually all of the South China Sea and its island chains. Malaysia and Brunei also claim waters and islands in the area.

At a Friday briefing, Foreign Ministry spokesman Hong Lei defended the island reclamation work, which China says is largely to improve living conditions for people in the area and help with weather forecasting and search and rescue work.

Such work is “lawful, justifiable and reasonable. It does not target or impact on any other country and we hope that relevant parties can have a correct understanding on that,” Hong said. KS

Read Next
Veloso’s sister flies to Jakarta
EDITORS' PICK
House energy committee chair Arroyo bats for cheap electricity
Honolulu Café is the cure for your Egg Tarts and Roastings cravings
Petition to reverse Comelec decision on Bongbong Marcos’ DQ case reaches SC
Luxe property: A way to build, preserve wealth
PH detects local transmission of Omicron subvariant BA.2.12.1
OVP: Pilot’s claim vs Robredo ‘never happened’, a ‘malicious fabrication’
MOST READ
Man posing as Marcos spox revealed to be an inmate in Bilibid — Guevarra
Heart Evangelista gets a ‘no’ from Chiz Escudero after asking, ‘Do I deserve a bag?’
Congress canvassing of votes for president, VP to begin May 24
3 Iloilo residents found with Omicron subvariant
Don't miss out on the latest news and information.