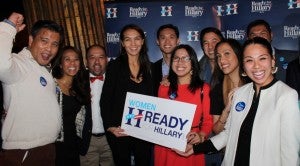 WASHINGTON, DC — With candidates from both parties declaring they want to be president of the United States, their supporters, including energized Filipino Americans, are wasting no time getting organized for what promises to be a long, arduous and fascinating campaign.

Here in the nation’s capital, Democratic Party activists seized the initiative as early as January by holding a series of “Ready for Hillary” events, which replicated across the country. Even before the former U.S. Senator and former Secretary of State announced her bid, Clinton supporters were already certain she would be the party’s nominee. Unlike the Republican field with at least six contenders, the Democrats don’t have a serious challenger to the former First Lady.

“There’s no doubt in my mind Hillary Clinton is the most qualified and the best choice for president of the United States,” says Irene Natividad, one of a few Filipino Americans who held key posts in Clinton’s 2008 campaign as director of outreach to Asian American women. 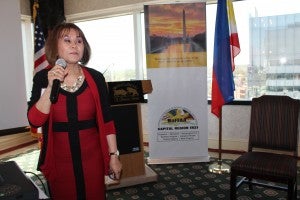 Republican Vellie Sandalo Dietrich-Hall speaks at a recent leadership conference in Richmond, Virginia on civic engagement, encouraging participants to run for public office as she did in 2007.

“The stakes are high in this election. and I firmly believe no one is better situated to confront the challenges facing the American people today.” Natividad, who served as an event chair for the “Ready for Hillary” event in January, is the president of the Global Summit for Women and chair of Corporate Women Directors International.

Natividad expects to hit the road for Clinton again, reprising her role as a “surrogate,” speaking to Asian Pacific American audiences across the country. Her main worry, she admits, is the way the media will depict her.

“I looked with great wariness at the way the press covered her announcement,” she says. “There are some who are still wary of a woman being Commander-in-Chief. I urge everyone to speak out if you see old biases creeping in or double standards being applied.”

“She has the business acumen to lift our country up economically, stop the surge in reckless government spending, and control budget deficits,” Hall explains. 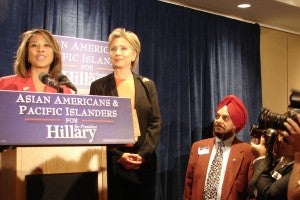 Like Hall, who ran unsuccessfully for the Fairfax County Board of Supervisors in 2007, Fiorina was the Republican nominee for the US Senate from California in 2010; but she lost to Sen. Barbara Boxer. To Hall, “Carly is well equipped and more experienced than Hillary to tackle these problems.”

A founder of the Filipino American Republicans of Virginia (FARV), Hall lists national security high in her agenda. “I hope Gov. Perry of Texas runs again because he is the only military service man among the candidates and he served America bravely.” To be sure, Hall adds, “I will be campaigning hard for whoever the Republican candidate will be.”

Describing herself as an Independent, community leader Gloria Federigan of Woodbridge, Virginia, says she has no gender bias when it comes to electing the first woman president.

“My preference always leans towards a candidate who is judged on past and current performances,” she points out. “My main concerns for the country are security from terrorism and violence, whether from abroad or from within; a vibrant economy that offers good employment and benefits for all; and good diplomatic relations with the other countries.”

Filipino American young professionals who were active in the Obama campaign are again looking forward to lending their knowledge, influence and expertise in the elections.

Valerie Santos, a host of the Ready for Hillary event, once served as Deputy Mayor of the District of Columbia. “Women leaders bring a special dimension to everything they do,” she says. “I’m so excited about a Hillary presidency that I will do everything I can to get her elected.”

For her part, Noemi Tacuyan Underwood wants to apply her skills in managing media and communications. Formerly APIA Vote’s deputy director, she is eager to lend technical assistance to voter education and voter registration drives.

“In the 2008 and 2012 elections, APIA Vote was instrumental in bringing to light the growing importance of the Asian American and Pacific Islander Vote,” Underwood reports.

Recent surveys suggest that Republicans enjoy a slight edge among Filipino Americans because many are devoutly Catholic and conservative, and a crucial segment of the Filipino population is made up of military veterans and servicemen. This may be changing, however, with younger voters, who are more progressive than their parents. They are going to the polls in larger numbers.

Among Asian Americans in general, surveys further indicate that Democrats have the upper hand. In 2008, Obama won two-thirds of Asian American votes, a significant increase from the 32 percent who voted for fellow Democrat Bill Clinton in 1992. Reasons cited for this rise include issues Democrats have been identified with among the electorate: women’s rights; health care; immigration reform and gay rights. 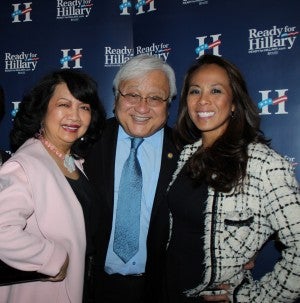 Although KAYA has not yet endorsed a candidate, “we believe that all Americans deserve a president who will embrace progressive solutions to the most pressing issues facing our country today,” Ymalay says. “They include protection of civil rights and fixing our broken immigration system.”

With KAYA’s resolve to “increase our electoral power, advocate politics that affect our community and develop leaders to represent us at every level of government,” Ymalay is confident Filipino American youth will once again mobilize their peers to cast their ballots and be counted. Born in Dumaguete City in the Philippines, Ymalay was raised in the Bronx, New York, then moved to the nation’s capital to work for the D.C. Public Schools.

Irene Bueno, a political consultant and former special assistant in the Clinton White House, is co-chair of Asian Americans and Pacific Islander’s Ready for Hillary, main organizer of the January fundraiser. “I enthusiastically endorse Hillary’s candidacy,” she declares.

Bueno adds, “Hillary will promote an agenda that provides the opportunity, support and tools AAPIs need to realize their potential and hopes. Her candidacy will address the challenges facing the AAPI community, including immigration reform, access to education, health care, housing, opportunity for entrepreneurs, eliminating gaps in services to seniors, and job training to help address income inequality.”

To Vangie Matreo, 59, a labor organizer with the American Federation of State, County and Municipal Employees (AFSCME), Hillary’s official announcement means her union will soon start planning to deploy activists to various parts of the country.

“I knocked on doors for Hillary in Iowa in the winter of 2007,”she recalls. “I look forward to doing it again because I want to see a woman in the White House in my lifetime. This time, I know she will win.”