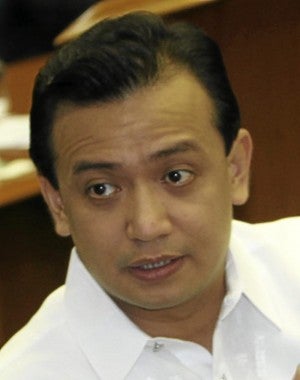 Senator Antonio Trillanes IV wants the Senate to look into the alleged land reclamations and dredging operations of China on the disputed Spratly Islands and the alleged downgrading of the Philippines’ claim over Sabah.

“This issue of China’s reclamation and dredging activities has grave national and regional security implications. It is high time that we assess our country’s preparedness for any contingency,” said Trillanes, chairman of the Senate committee on national defense and security, in a statement on Tuesday.

The senator filed Senate Resolution No. 1269 seeking a Senate probe on the issue.

In filing the resolution, Trillanes said there is a pressing need for Congress to look into and review the relevant national policies and international agreements that are pertinent to the Philippines’ claim over Spratly Islands, saying the said reclamation activities “may have significantly changed the physical features of these disputed areas, which in turn, could bring larger geopolitical consequences such as providing a stronger basis for China’s territorial claim, thereby diminishing the Philippines’ assertion of sovereignty.”

It was reported last February that China has been conducting dredging activities at Panganiban Reef (Mischief Reef)  — a Philippine-claimed area in the Spratlys, which Beijing started to occupy in the mid-1990s — similar to earlier reported land reclamation work in other areas of the Spratlys it occupies.

In response, the Department of Foreign Affairs (DFA) has lodged a protest with China concerning the said land reclamation activities. This was included in the note verbale handed to Chinese Embassy Representatives which expressed  the Philippines’ strong objection to the stepped-up Chinese building activities at Kagitingan Reef (Fiery Cross Reef), including the plan to build an airstrip on top of land dredged from around the area.

But in March, surveillance photos of five reefs in the Spratlys surfaced, which show an advanced stage of construction of a military facility, based on the configuration and the fixed structural design of the buildings. The Philippine military believes this construction to be part of China’s support naval and air asset operations in the area.

READ: In photos: China’s construction of military bases in Spratlys

“To escalate the already brewing tension, just recently, Sultan Esmail Kiram II of the Sultanate of Sulu and North Borneo (SSNB) expressed alarm over news reports that the DFA, in a note verbale handed to representative of the Malaysian Embassy, offered to drop the Sabah claim in exchange for Malaysia’s support against China in the West Philippine Sea (South China Sea) territorial dispute,” the resolution said.

“If this allegation is true, the government must explain because this is tantamount to a sellout,” Trillanes, former Navy officer, further said in the statement. IDL