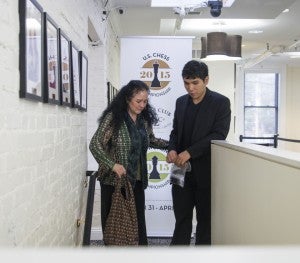 Grandmaster Wesley So with former actress Lotis Key, whose family So lives with in Minnesota, at the US Chess Championships. PHOTO BY LENNART OOTES.

LAS VEGAS, Nevada — Wesley So exacted a measure of revenge on his rivals, demolishing defending champion Gata Kamsky in the 10th round while Hikaru Nakamura virtually sewed up the US Championships in Saint Louis.

Playing precisely with the black pieces, So built up a formidable kingside pawn advantage and was on the verge of capturing a knight when Kamsky, last year’s champion, resigned on the 56th move.

Coming off a 9th round forfeit, it was a remarkable display of poise by So, who nevertheless is now out of the running for the $45,000 first prize with just one round left.

It looks like Nakamura has it in the bag after disposing off his closest rival, Ray Robson.

The two drew after only 30 moves, leaving Nakamura with seven points and Robson with 6.5 points.

Nakamura only has to draw with Alexander Onischuk in tomorrow’s final round to regain the championships he last won in 2012.

So will face 16-year-old Kayden Troff, but with only 5.5 points in 10 games, the Filipino grandmaster is mired at fourth place, half-a-point behind Onischuk, who is at third with 6/10 record.

In the world’s live ratings, both Nakamura and So have slipped.

Shocker: So forfeits 9th round in US Chess meet