No WWII veteran makes it to 102-km ‘Death March’ run 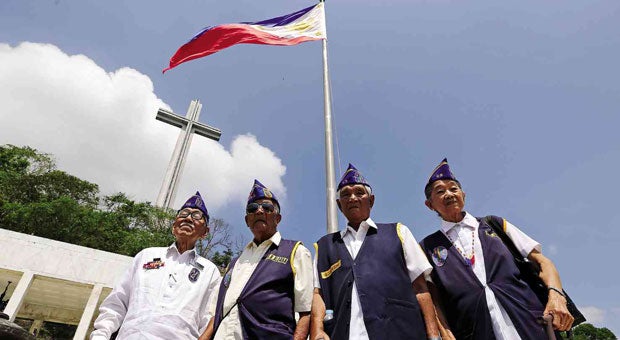 CITY OF SAN FERNANDO—No war veteran made it to the “Walk with Heroes” portion of the tribute run to Filipino and American soldiers who took part in the Death March from Bataan to Tarlac in 1942.

“That’s understandable. They are no longer strong. Many are not around anymore,” Edmundo Paez, the commemorative run’s founder, said of the veterans’ absence in that segment of the Araw ng Kagitingan Ultra-Marathon.

The number of surviving World War II veterans has dropped to 12,297 as of March 2015, according to the Philippine Veterans Affairs Office. Most of the veterans are in their 90s now.

Paez, 72, initiated the run 30 years ago to correct the Death March route taken by an athlete from New Zealand.

Like last year, what veteran Perigrino Divinagracia managed to do was send the runners off with a wave from Kilometer Zero in Mariveles, Bataan, Paez said. Divinagracia is the Veterans Federation of the Philippines post commander in that town.

“It used to be that they walked with us for some steps,” Paez said.

He himself is growing weak. “I will try to go on as long as my legs and feet can manage to run,” he added.

Living on his P13,000 monthly pension as a retired employee of the Bureau of Fisheries and Aquatic Resources, Paez has sustained the tribute run through the help of athletes, friends, companies and local officials. They contribute food, drinks, gasoline and shirts that he shares with veterans.

The 1942 march of more than 70,000 Filipino and American soldiers, which followed after the surrender of Bataan on April 9 that year to the Japanese Imperial Army, began on April 10 from Mariveles and April 11 from Bagac town, also in Bataan.

Many died of hunger and dehydration along the way or were killed traversing the 102-km route that ended at a train station in the City of San Fernando in Pampanga. Here, they were crammed into freight boxes and transported to Capas, Tarlac.

Nestor Datu, a retired government employee, said he was only 11 years old when he saw this part of the war.

“Filipino and American soldiers were weak when they arrived in San Fernando … I don’t know from where the music came but it was blaring ‘Harbor Lights.’ Some soldiers were made to sleep overnight at San Fernando Elementary School before they were loaded on the train,” Datu recalled at rites organized by the city government on Thursday.

The train ride ended at the Sto. Domingo terminal in Capas, with the prisoners of war walking another 12 km to Camp O’Donnell where more died of starvation and diseases.

Dr. Daniel Fausto Jr. came to honor his father and namesake who served in the 31st Infantry Division of the 31st Field Artillery.

“I imagined the difficulties our veterans went through. Running was hard enough, what more if you were not given water or food or any rest,” Radaza said.