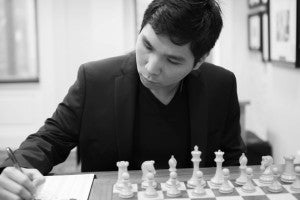 Wesley So in the seventh round of the US Chess Championships. US CHESS CHAMPIONSHIPS PHOTO

LAS VEGAS – Continuing his up-and-down performance, Wesley So displayed fine form to prevail over Alexander Onischuk in the seventh round of the US Chess Championships in Saint Louis.

Using his favorite Ruy Lopez with the white pieces, So nursed a slight opening edge into a decisive end game advantage to pull out the win in 36 moves.

Coming off a crucial loss to former Webster University teammate Ray Robson in the previous round, the victory somehow helped the 21-year-old Bacoor, Cavite native to right the ship with just four games left in the $175,000 tournament.

It was So’s fourth win against two loses and a draw, and with 4.5 points, he has gained second place, behind co-leaders Hikaru Nakamura and Robson, each with five points.

Even though he has not lost in seven games, Nakamura, the No.3 in the world, has not shown his dominant game, and settled for his fourth draw against youngster Samuel Sevian.

Robson, meanwhile, kept his sharp form and beat Daniel Naroditsky to match Nakamura’s five points in the tournament that offers $45,000 to the first-placer.

So is reportedly battling some side issues and off-the-board distractions and was at one point on the verge of depression.

A close family relative is reportedly causing trouble by making unreasonable demands, including coming to Saint Louis to confront Wesley.

Organizers have reportedly banned the relative from the hotel the players are staying, but the distraction was blamed for So’s lack of concentration, causing him to lose two games, particularly in the sixth round, after he was not able to sleep the night before.

A timely pep talk by grandmaster Yasser Seirawan has allowed So to put his mind back in the tournament, a source close to Team Wesley said.

“So drew much comfort from Seirawan…that he was able to sleep… and woke up refreshed,” said the source in a Facebook posting on the webpage Chess Philippines.

So and Nakamura draw at US Chess Championships