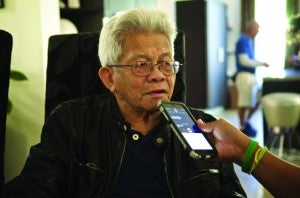 LOS ANGELES — Before Manny Pacquiao became a people’s champ, there was a Benedicto Delgado in his life. Tatay Ben, as “Pac-Man” fondly calls him, was the congressman’s first-ever boxing coach in the Philippines and his trainer for a good six years.

The two met in 1995 at LM Gym in Manila where they both went for training. Pacquiao was only 17 years old then and already boasted a winning record of 64 amateur fights. “Usa mi nagka-himamat, iya kong gihangyo nga kung pwede ako siyang i-train [When we met, he requested me to be his trainer],” Delgado told Manila Mail in vernacular Bisaya during a one-on-one interview at Pacquiao’s old mansion in Los Angeles.

“He was already making a name for himself, winning a number of bouts, before I joined his team as his personal coach,” recalled the 65-year-old, Davao-born coach.

He said he did not think twice about accepting Pacquiao’s job offer. According to him, Pacquiao was so driven as a professional boxer that he trained hard even when no one was watching.

“Ang maayo kay Manny, naa siya’s initiative ba nga dili nimo siya kinahanglan tudluan pa ug ka duha [What’s good about Manny is that he has initiative. You don’t have to repeat yourself during training],” the coach said. Pacquiao has the ability to learn on his own, he added, noting the champ’s very disciplined nature and admirable professionalism.

Delgado explained that in boxing, trainers are only there to guide the boxers. “I give Manny much credit for his success because not only is he a skilled boxer, he is also a down-to-earth champion.”

Pacquiao began his professional boxing career in January of 1995. Before Delgado came on board, “Pac-Man” already had a record of 18 flyweight title wins and one loss against Rustico Torrecampo, who won via knockout in a February 1996 match.

“Our first fight together was his bout with Ariel Austria of Davao City in May 1997,” said Delgado. It was a technical knockout in favor of Pacquiao.

After three more bouts, opportunities to fight in Japan and Thailand came, but because of budget constraints, Delgado was unable to join the team.

“The organizers could only afford travel accommodations for two at the time. And the choice was always Pacquiao and his manager.”

Disengaging from Pacquiao’s training in 2000, Delgado left the Philippines in search of better career opportunities in Florida. He became one of the trainers at the gym of boxing legend Roy Jones Jr. in the Sunny State.

But in 2001, he was hired once again as the official coach of the “Pac-Man.” In June of that year, Pacquiao defeated Lehlohonolo Ledwaba of South Africa by technical knockout, winning the International Boxing Federation’s Super Bantamweight title. Held at MGM Grand in Las Vegas, this fight was Pacquiao’s first big break in professional boxing in the U.S.

With Pacquiao’s international victories, Delgado became the only Filipino coach whose trainees have won three world records. Delgado was also the coach of Rolando Pascua, who won the World Boxing Council’s World Light Flyweight title in 1990 following a bout with Humberto Gonzales in Los Angeles.

“Kaming mga trainer, sa laban na mi naga-advice pero as far as training kabalo na na sila kung unsa’y buhaton [As trainers, we give advice during the fight but as far as the training goes, the fighters know what to do].”

Delgado said he has so much faith in Pacquiao because “he’s sensitive to the training, no matter what you tell him, he will obey you without question.”

He has shared some pointers with his former trainee for the upcoming bout in Las Vegas. Freddie Roach replaced Delgado in 2001.

“With due respect to his current coach, Freddie Roach, I shared with Manny some of the things I want him to deliver, pero naa ra na niya kung iya kong tumanon [but it is up to him whether to follow suit].”

On May 2, Pacquiao is set to defend his World Boxing Organization welterweight title against Floyd Mayweather. The bout is touted as the biggest boxing event in the history of American sports.