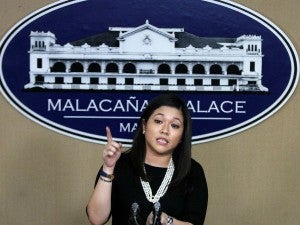 MANILA, Philippines—Malacañang on Thursday appealed to an estimated 700 Filipinos who are still in Yemen to avail of the government’s mandatory repatriation program following reports that the political and security situation in the East African country has further deteriorated.

Wire reports said Saudi Arabia, in coordination with a coalition of 10 allies, had launched an air campaign against Houthi rebels closing in on Aden, the strife-torn nation’s second largest city.

Yemeni President Abed Mansour Hadi has fled the presidential palace in the southern port city, the reports said. However, it was not clear if Hadi had left the country, which shares a long border with the Saudi kingdom.

Deputy presidential spokesperson Abigail Valte reiterated the Department of Foreign Affairs’ (DFA) “urgent call on all our kababayans in Yemen to leave immediately due to the unstable security situation” in their host state.

In a text message, Valte said “there are an estimated 700 Filipinos in Yemen and our diplomatic mission there continues to assist them in returning to the country.”

The DFA, she noted, had earlier raised crisis alert for Yemen to 4, which calls for the mandatory repatriation of all Filipinos from that country.

Communications Secretary Herminio Coloma Jr. said the government is still “verifying reports and getting the latest update from the DFA” on the situation in Yemen.

Labor Secretary Rosalinda Baldoz said the rapid response team (RRT) under the Office of the President is “ready for deployment anytime” to Yemen to help repatriate overseas Filipino workers and other Filipinos there.

Baldoz said, however, that they are still waiting for advice from the DFA, which with the Department of Labor and Employment is also part of the RRT.

Baldoz also said the government’s program for the mandatory repatriation of Filipinos in Yemen was still in force.

“Yes, it is mandatory, but the workers are not ready to leave. We hope this time they can be easily convinced,” she said.

Philippine Ambassador to Saudi Arabia Ezzedin Tago is now in Yemen to oversee the operations of the crisis management team and ensure the safety of Filipinos there, most of them nurses, household service workers, engineers, technicians and mechanics, according to Baldoz.

The Saudi air strikes reportedly came hours after unconfirmed reports said that Hadi had fled the as the Houthi rebels closed in on Aden.

The rebels had also just seized an air base just 56. 3 kilometers from the port city, that was critical to the United States’ drone operations against the al-Qaida international terror network.

Hadi earlier asked the United Nations Security Council to authorize a military intervention in support of his government to oust the rebels who now control much of the disintegrating nation.

In an advisory, the Overseas Workers Welfare Administration should coordinate with the government’s crisis management team in Sanaa, which is holding office at the Mövenpick Hotel on Berlin Street. It can be reached through telephone (967) 733844958.

Filipinos there may also contact the Philippine consulate on Damascus Street in the Hadda Area through telephone (967) 1416751.

Why It Matters: The Saudi-led intervention in Yemen