DFA: No Filipinos reported on board crashed Germanwings plane 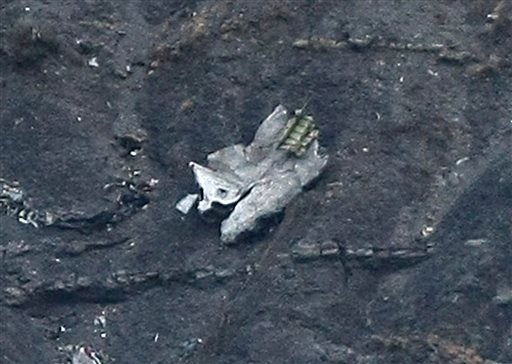 Debris of the crashed Germanwings passenger jet is scattered on the mountain side near Seyne les Alpes, French Alps, Tuesday, March 24, 2015. The Germanwings passenger jet carrying at least 150 people crashed Tuesday in a snowy, remote section of the French Alps, sounding like an avalanche as it scattered pulverized debris across the mountain. AP PHOTO

MANILA, Philippines—No Filipinos were reported on board the ill-fated Germanwings plane carrying 150 people that crashed Tuesday in a remote area in France, the Department of Foreign Affairs (DFA) said Wednesday.

“As of now, no Filipino is reported to be on board the plane according to our Embassy in Paris,” DFA spokesperson Charles Jose said in a text message.

A black box has been recovered from the scene and pulverized debris of the plane were scattered across Alpine mountainsides.

The Airbus A320 operated by Germanwings was less than an hour from landing in Duesseldorf on a flight from Barcelona when it went into a rapid descent. ID

Jet crashes in Alps with 150 aboard; no survivors expected