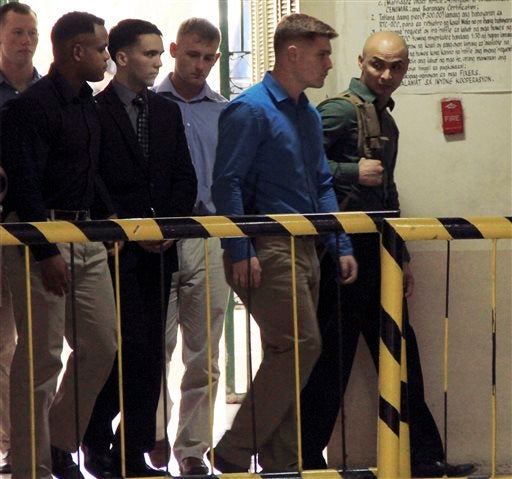 US Marine Pfc. Joseph Scott Pemberton, third left, the suspect in the Oct. 11, 2014, killing of Filipino transgender Jennifer Laude, is escorted into the courtroom for his scheduled trial Monday, March 23, 2015, at Olongapo City. AP PHOTO/JUN DUMAGUING

OLONGAPO CITY, Philippines—“Barbie,” one of the last people to see transgender Jeffrey “Jennifer” Laude alive on the night of Oct. 11, 2014, took the witness stand for the prosecution on Tuesday, the second day of the murder trial of US Marine Lance Cpl. Joseph Scott Pemberton.

Like the first witness, Elias Gallamos, a bellboy at the Celzone Lodge who testified on Monday, Barbie identified Pemberton as the Caucasian who was with Laude in a disco bar before she was found dead in the motel’s toilet.

Barbie is also a transgender whose identity is being kept confidential as she has been placed under the government witness protection program, said Virgie Suarez, a lawyer for the Laude family.

Pemberton, whose trial started in a court here last Monday, is charged with murder, which carries a maximum penalty of life in prison. The court registered a “not guilty” plea for him last month after he refused to enter a plea.

State prosecutors said they are confident they can win a conviction.

Pemberton, an antitank missile operator from New Bedford, Massachusetts, is accused of strangling Laude and then drowning her in a hotel toilet last October after discovering she was a transgender woman.

Pemberton’s lawyers tried to impugn Barbie’s credibility as a witness by pointing out that she was a “sex worker or a prostitute.”

“The defense tried to establish that Barbie—and even Jennifer—were sex workers but that is irrelevant,” Suarez said. “Being a prostitute does not mean one should be killed if the customer was not satisfied,” she said.

Suarez said Barbie was “calm and yet honest, consistent and confident” when she took the stand.

Laude’s mother, Julita, and sisters Marilou and Michelle attended the hearing on Tuesday.

Pemberton arrived at the heavily secured courtroom at about 8 a.m. and left before noon. Everyone entering the courtroom was subjected to inspection by court employees who confiscated all recording devices such as cameras.

Reporters are barred from covering the trial, but are able to obtain trial details from Suarez during courtroom breaks.

Olongapo Chief Prosecutor Emilie Fe de los Santos led the direct examination of Barbie but did not make herself available for interviews.

Suarez said Barbie testified that she was with Laude when the latter met Pemberton at the Ambyanz Disco Bar here.

Pemberton was bar-hopping with fellow Marines at the time after participating in joint US-Philippine military exercises.

According to Suarez, Barbie also narrated how she accompanied Laude and Pemberton when the two checked into the Celzone Lodge.

“She (Barbie) pointed to Pemberton as the last person who was with Jennifer when she left the two at Celzone Lodge,” Suarez told reporters. She said Barbie’s testimony was “very valuable” to the prosecution case because she had direct contact with Laude and the US serviceman hours before Laude was killed.

“Barbie and Elias (Gallamos) are the star witnesses of the prosecution because their testimonies are crucial to the case,” she said.

“The prosecution is happy with the testimony of Barbie,” Suarez added.

Weeks before the trial, there was talk that the two sides were quietly discussing a possible plea bargain in which Pemberton would reportedly plead guilty to a lower charge in exchange for money for the Laude family. Both sides on Monday denied initiating the talks.

Laude’s mother, Julita, told reporters she would not drop the case against Pemberton even if she was offered a million dollars.

“What they did to my child was gruesome,” she said. “Just because we are poor doesn’t mean we can’t fight for justice.”

The Gabriela women’s rights group yesterday urged Jennifer’s family to remain “steadfast” amid reports of a P21-million plea bargain agreement for the release of Pemberton.

In a rally near the United States Embassy in Manila, Gabriela secretary general Joms Salvador denounced the US government for the supposed settlement which she said was “an insult to the family and all patriotic Filipinos seeking justice for Jennifer Laude.”

Salvador likened the deal that made to “Nicole” during the Subic rape case trial nearly a decade ago. Lance Cpl. Daniel Smith was acquitted in April 2009 after Nicole retracted her statement that he had raped her. Shortly after the decision was handed down, Nicole left for the US.

“Jennifer’s family could be vulnerable to such attempts by the US, but we urge them to be steadfast in pursuing justice for Jennifer,” said Salvador.

The case has reignited a debate over custody of US military personnel accused of crimes in the Philippines. The dispute was eased after Washington agreed to move Pemberton from a US warship to the Armed Forces’ main Camp Aguinaldo in Manila, where he is held under US custody but with an outer ring of Filipino guards.

The case occurred at a time when the Philippines and the United States have strengthened their military ties with the recent signing of a defense accord that allows greater US access to Philippine military camps.–With Jovic Yee and AP