From ‘yaya’ to Spanish lawyer 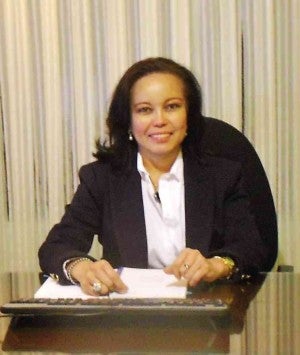 Chona Tenorio Abiertas: Every work is meritorious, as long as we enjoy it.

Twenty seven years ago, Chona Abiertas, a young office management graduate went to Barcelona, Spain, as a “stepping stone” to get to the United States.

But she fell in love with Barcelona and considered it as her hometown, just like the place she left, Mamburao, Occidental Mindoro.

Upon arrival in Spain, Abiertas worked as a baby-sitter and a domestic helper because she was in an “irregular situation” or she has no work permit since she arrived as a tourist.

“I was invited by a friend. Getting a visa in 1987 was not difficult at that time,” she says.

Working in Spain was not difficult but the language was a barrier, even if about 20 percent of our language is derived from Spanish.

Catalan is the regional language in Barcelona which is a mixture of Spanish and French. Having studied Spanish during high school helped her in learning the language of the country.

“The little Spanish I learned in high school gave me clue to understand what people are talking about.”

One time, she recalls, her employer asked her to prepare dinner.

“I want carne a la plancha. I was wondering how to do it, if I need to get a flatiron and press the meat. I called a friend and she explained that it means I have to put the meat on a thick frying pan and heat it to the maximum, then put the meat for three minutes with a few drops of oil side by side, and that’s all,” she says.

Abiertas did not want to spend all her life doing domestic chores. After two years she got a residency permit. She studied computer operations and continued her business administration course at Washington University in Barcelona.

After graduation, she worked as a personal assistant in a bottling company for 15 years. But having work and receiving her citizenship in 1995, she decided to pursue higher education. She studied law at University of Barcelona and took a postgraduate course in diplomatic and consular relations.

Although she found Catalan quite difficult from Spanish, this did not hinder her to get high grades.

“Catalan language is not easy and, of course, I got difficulties when it comes to discussion. I understand it very well but I have no guts to speak it in class, so I make my expositions in Spanish,” she says.

Abiertas became a lawyer in 2012. She established CAT (Chona Abiertas Tenorio) Law Firm. Tenorio is her middle name. The firm specializes in labor law, social security, administrative cases, family cases, and mercantile and commercial matters. To date, she has two law offices in Barcelona and Madrid, with five lawyers who are all Spanish.

She has clients from different nationalities aside from Spaniards and Filipinos. Although equality and ethics are practiced in the profession, she feels that some clients who seek her legal expertise doubt her capacity but when she starts giving advice and explaining her strategies, they leave satisfied and choose her to represent them in courts. 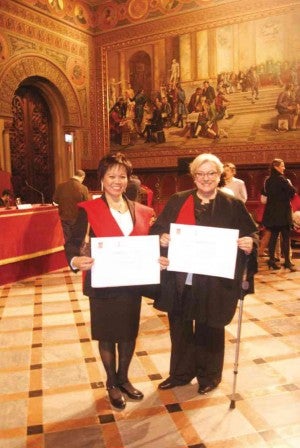 Abiertas during the graduation ceremony at University of Barcelona in 2012.

As a respected member of the Spanish-Filipino community in Barcelona, she collaborates with the Spanish Embassy and Philippine consulates, concerning Filipinos’ rights and obligations in Spain. She also gives seminars and lectures to Filipino leaders and associations regarding labor laws and social security benefits and counseling to Filipinos with legal issues.

In 2012, she was recognized by the Philippine community with the Dr. Jose Rizal Award for Academic Excellence.

In 2014, according to the World Population Review, there are 241,000 Filipinos in Spain, mostly in Barcelona and Madrid.

Although a former colony, the Spanish view Filipinos positively.

Lucky to be bilingual

Abiertas also encourages every Filipino to learn the Spanish language not only because Spain played a very important part of our history but also Spanish language is used in three-fourths of the world.

“We are lucky to be a bilingual country; everybody could speak English, now if we study Spanish you will never be lost in the rest of the world,” she explains.

To her compatriots abroad, Abiertas says: keeping up the good work and not losing their ambitions are the keys to uplifting their situations.

“Every work is meritorious, as long as we enjoy it and we give all our best to obtain our goal. And wherever we go, whatever we do, don’t forget our customs and our traditions. Show to the world our culture and be proud of our race,” she ends.