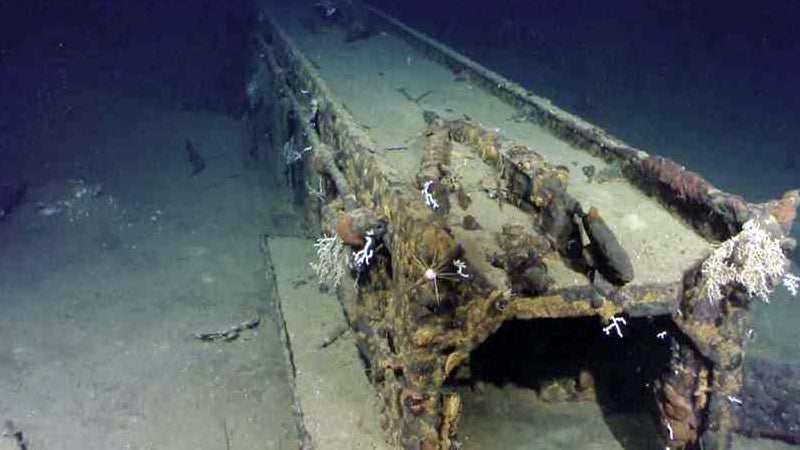 TOKYO—Debris scattered over a large area at the bottom of the Sibuyan Sea in the Philippines indicate that the massive Japanese World War II battleship Musashi was blown up into pieces in an undersea explosion 70 years ago.

Experts from a research team analyzing a live feed from an unmanned underwater probe Friday said they believe the Musashi suffered at least one explosion while descending in the 1,000-meter deep sea.

Except for an initial series of partial photos and images of the ship, Friday’s more than 2 and a half hour feed was the first detailed images showing the current status of the ship.

The Musashi sank in October 1944 in the Sibuyan Sea during the Battle of Leyte Gulf, losing half of its 2,400 crew. It was last seen disappearing into the water in one piece.

“The wreck is actually very damaged,” said David Mearns, a marine scientist on the Musashi research team. “It appears she suffered at least one, if not two, magazine explosions which would have sheered off the bow and the stern, and its entire middle section of its super-structure.”

The footage showed sections of the ship that used to be an air-combat platform. The debris scattered in areas approximately 800 meters by 500 meters, according to the research team.

The feed also showed holes in the bow area, apparently made by US torpedo attacks before the Musashi sank, a torn off propeller, as well as gun turrets and catapults that were broken off. The ship’s stern as upside down.

The research team, sponsored by Microsoft cofounder and entrepreneur Paul Allen, was the first to successfully locate the ship, just ahead of the 70th anniversary of the war’s end later this year.

Allen announced the find of the Musashi—one of the most sophisticated battleships ever built—in the Sibuyan Sea eight days ago, after a high-tech mission lasting eight years.

Giant gun turrets and propellers, a torpedo-damaged hull and a plane wing resting on silt were among the images beamed live on Friday by an unmanned mini-submarine from about a kilometer below the water’s surface.

“We think we’re conveying something to the world which is significant. It also teaches us about the past and what happened,” said Yannick Olson, captain of Allen’s yacht, from where the mini-sub was being directed.

Excited historians have likened the discovery to finding the wreck of the Titanic, the famed British passenger liner that sank in the North Atlantic Ocean after colliding with an iceberg in 1912.

The wreck of the Musashi, partially buried and scattered over a large debris field, is also the presumed graveyard of some of the more than 1,000 crew members killed in the battle.

However, the video streamed on Allen’s website showed no human remains.

“It’s quite clear it didn’t land on the bottom in one piece,” Olson said. “The destruction was total.” Barnacles and light-colored coral clung to the broken hull, propellers and anchor of the 263-meter ship, as well as on corroded sections of range-finders for the ship’s guns, their armor plating ripped off.

An eel was seen crawling out of the remains of the warship’s aeroplane catapult, with instructions in Japanese script written on it, while two pink fish patrolled outside the hull.

The worn remains of the chrysanthemum seal of the Japanese emperor remained on the ship’s bow.

Scott Matthews, a commentator for the live-stream, said the Allen expedition took two weeks to explore the debris field, which measured about 0.44 square kilometers.

The Philippine government said last weekend that it would take control of the wreck and coordinate with Allen over its exploration. AP, AFP