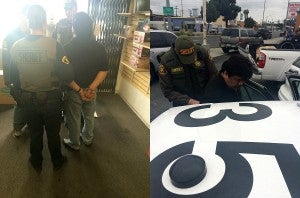 Law enforcement officials arrest Fernando Bernabe at his FLB video store last December for manufacturing and selling bootlegged movies and TV shows, many of which are owned by ABS-CBN. CONTRIBUTED PHOTO

REDWOOD SHORES, California —  Fernando Bernabe, who faced charges in Long Beach, California criminal court in February for the second time for selling pirated DVDs of ABS-CBN movies and TV shows at his movie rental store and gun possession, pleaded guilty and was sentenced to one year in prison.

Bernabe will be on probation when he finishes his one-year jail sentence. If he violates probation and sells pirated DVDs again, he will return to jail for a four-year prison term.

In late January, Mary Smith of Barooga, New South Wales, Australia, who was the largest eBay seller of pirated ABS-CBN DVDs, pleaded guilty to all charges in Finlay Court in Australia.

Prior to her arrest, the Australian police executed a warrant on Smith’s home and seized a large number of suspect DVDs, hard disk drives, machinery and materials used to copy DVDs and mail them to customers.

Smith was not sentenced to jail this time as it was her first offense but was ordered to pay compensation to ABS-CBN for all profits she made from the sale of the unauthorized copied DVDs and pay criminal court fees.

“It is a responsibility to curb unlawful and unauthorized reproduction and use of content owned by others.  It is theft.  Like what many others in the industry who believe in and share this responsibility, we will continue to go after those who knowingly steal and benefit from this illegal practice,” said ABS-CBN AVP of Global Anti-Piracy Elisha Lawrence.