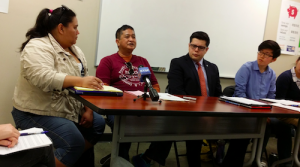 OAKLAND, California – Between his full-time job as a paid caregiver and being a parent, Sonny Villar has little time for anything else, especially because of the hours he spends commuting to and from work by bus.

Now, Villar is going on line late at nights and cramming for the California driver’s license test, scheduled for March 5, so he can get behind the wheel of a car, something he has been wanting to do since he arrived in the United States in 2003.

Ten other states have similar bills that offer driver’s licenses to their residents regardless of their status. About 40 percent of the nation’s foreign-born currently live in a state that offers licenses to even the undocumented.

As of now, nearly 95,000 people have been given licenses under California’s AB 60.

Villar was on a panel here at the Asian Resource Center yesterday put together by a coalition of Asian and Pacific Islander organizations to encourage community members to take advantage of the Safe and Responsible Drivers Act.

Jenny Zhao, an immigrant rights staff attorney at the Asian Law Caucus in San Francisco, observed that while driving with a license “translates to greater safety on our roads” because immigrants will now be tested, licensed and insured, they should keep in mind certain things before applying for the special license.

For instance, if a person had obtained a driver’s license in the past using false information, including a fake social security number, that person “won’t necessarily be denied an AB 60 license, but the DMV will probably know about it and investigate,” Zhao warned.

“The DMV has said they will not refer these cases to law enforcement as long as the person used the license for driving purposes only and did not commit any other criminal activity,” she said, adding: “We have not yet seen how this policy is playing out, so we are advising people to use caution.”

She also pointed out that the DMV could share information provided on the AB 60 application form to law enforcement if that person is being criminally investigated by state or federal officials, or to aid in locating individuals who pose a national security risk or public safety threat.

Zhao also said the special license has text that states that it is not acceptable for “official federal purposes,” such as boarding an airplane.

She suggested that applicants who have doubts about their eligibility should consult with a trusted attorney before applying.

Juhee Kwon, a program associate with the Korean Community Center of the East Bay, read out a testimonial from a 40-something undocumented Korean domestic worker, who couldn’t attend the February 23 event, who has applied for a driver’s license.

In it, the woman who wanted to be identified only as “Ms. Kim,” said that not being able to drive had forced her to miss out on her child’s school activities, limit trips to the grocery store and postpone hospital visits.

Diego Gonzales, a field representative with the office of Assemblymember Rob Bonta, D-Oakland, said that because there is “a lot of room for fraud” in the application process, Bonta’s office is partnering with community organizations to help his constituents get through the process.

He said people are posing as immigration consultants or notarios and offering to help immigrants get their license for a fee, when all that the immigrant has to do is to walk into a DMV office and fill out an application, paying the standard driver’s license fee.

Gonzales said that so far Bonta’s office has helped 2,000 people get their licenses. The lawmaker is hosting a fraud prevention workshop in Oakland in April, he said.

In at least two states that are offering driver’s licenses to their undocumented residents – Colorado and New Mexico – attempts are being made by conservative lawmakers to defund the program of the money needed to operate it. They say it amounts to providing amnesty.

Meanwhile, even though a driver’s license is still not in his possession, Villar has already begun dreaming big. Once he gets licensed, he said, perhaps he could take in the sights and sounds of Las Vegas. Also, he could take up a second job to boost his income.

“I love being a caregiver, but I could use some additional money,” he said.

Then, with a delightful grin, he told the audience: “I will see you all on the road [soon].”