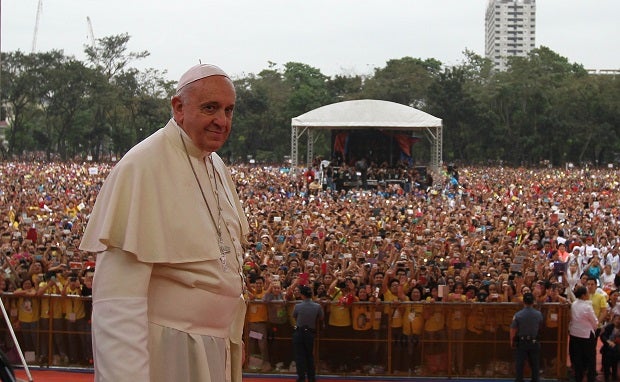 Pope Francis blesses the crowd during a meeting with the youth University of Santo Tomas in Manila, Sunday January 18, 2015.(REY S. BANIQUET/NIB)

MANILA, Philippines–Filipino Catholics will get a chance to relive the visit of Pope Francis via a documentary televised nationwide.

According to the Catholic Bishops’ Conference of the Philippines (CBCP) website, the film captures some of the most significant moments of the Pope’s visit through the eyes of those who patiently waited, lovingly prepared and wholeheartedly took part in the events of Jan. 15 to 19.

The documentary was made possible by the CBCP’s Episcopal Commission on Social Communications with production help from the Jesuit Communications (JesCom).

JesCom, in the CBCP post, said the title encapsulates how the theme of “mercy and compassion” was embodied and lived by the Filipino faithful, especially in keeping with time-honored values of malasakit, bayanihan and damayan.–Tina G. Santos