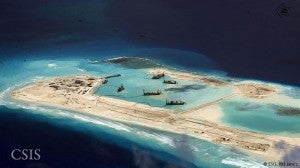 This is the reality: China’s military leaders are rushing the construction of military bases in six different reef areas inside the Philippines’ exclusive 200 mile economic zone. The Philippines is doing nothing to immediately stop it.

In a year’s time, these bases will practically be completed. Once they are completed fighter planes, bombers, helicopters, missiles and heavily armed warships will be stationed there. It will then be practically impossible to remove them.

This is a very dangerous situation for the national security of the Philippines and surrounding countries. This is the same kind of grave danger for which President John Kennedy risked going to war when Russia was establishing missile bases in Cuba. He ordered the immediate blockade of Russian ships proceeding to Cuba to set up the bases.

On February 27, 2015, the USPinoys for Good Governance (USP4GG), led by its Chairperson, prominent New York-based philantropist Loida Nicolas Lewis, hosted a dinner for about a hundred prominent overseas Filipinos at a Fil-Am’s Makati penthouse.   Department of Foreign Affairs Secretary Albert del Rosario was the main guest.

When the issue of the rushed construction of Chinese military bases in Philippine territory was brought up and Secretary Del Rosario was asked what the Philippines was doing to immediately stop it, Del Rosario said that the Philippines had already brought a case against China’s intrusion in the International Tribunal on the Law of the Seas (ITLOS) where the applicable law would be the United Nations Convention on the Law of the Seas (UNCLOS).

Being a lawyer and familiar with the law and procedures involved, I responded to the soft-spoken Secretary whom I have no doubt is a good man: “I have little doubt that we will win our case in ITLOS, but the problem is that this will take another year or two. China also has already declared that she will not abide by the decision. Meanwhile, they continue to rush the construction of these deadly military bases. Unless we immediately stop their construction, at the rate they are going, these bases will be realities in a year’s time or so. What therefore are we doing to immediately stop these constructions?”

Practically everyone was shocked when Secretary del Rosario said nothing was really being done except the legal action in ITLOS and added: “I don’t really know what to do (to immediately stop the construction of these bases).”

This non-action on the part of the Philippine government is not only terribly alarming, but it’s also very disappointing and frustrating. Obviously, a stronger more decisive leadership is immediately needed on the part of President Benigno Simeon Aquino III and other leaders on this very important issue. It’s even more more important than the Basic Bangsamoro Law (BBL) to which the President and Congress are giving full attention. Here, national security and the future of the entire Filipino people are at a definite risk.

Secretary del Rosario’s statement clearly reveals that nothing is being done to immediately stop the construction of these deadly bases. If we proceed on this non-action mode, they would definitely be completed. If we were to act only then to destroy them, it would mean more lives on both sides lost and we would be on the losing end. If we act now, focused only on the physical destruction of these bases, few lives would be lost if any. We are not warring against China, we are simply legitimately defending ourselves against possible future attacks from inside our territory.

We need to destroy these bases now. We really have no choice.

Reprinted below is the article I wrote in June last year when these bases were less than 1/3 of their sizes now. I believe that it is even more relevant now.

The complaint with the International Tribunal on the Law of the Seas (ITLOS) regarding China’s illegal and immoral invasion into Philippine terrritory and its use of brute force to take over atolls and islands is a good move. A favorable decision would affirm Philippine ownership of certain real estate, marine and energy resources within the country’s 200 mile Exclusive Economic Zone as defined by the United Nations Convention on the Law of the Seas. (UNCLOS).

However, it will take another two years or so before a decision is made. Moreover, China has refused to play by the rules and has defiantly declared that she will not respect the decision of ITLOS. As such, the Philippines cannot rely on this court action to solve this difficult problem of a deceptive and powerful bandit-like rogue state stealing islands, atolls and valuable resources.

Meanwhile, knowing that the Philippines neither has the navy nor the air power to stop them, China continues to take over more Philippine islands and atolls. Chinese fishermen also poach continuously in Philippine waters. The Chinese are now even rushing land reclamation military bases projects in various areas they seized inside Philippine territory. These future bases are within easy striking distance to major cities in the Philippines and surrounding ASEAN countries. Once these military bases are built, it would practically be impossible to remove them.

Having enemy fighter planes and missiles so proximate to potential target cities is like having a bag of explosives padlocked on one’s neck by a bad guy who holds a remote control which he can explode anytime. The baddie has the poor guy under his complete control.

With these bases in place, China can demand anything from the Philippines and take anything she wants. For all practical purposes, the Philippines will then be a slave nation. We would be fools to block this unpleasant reality from our minds and not try our damndest to prevent this terrible situation. We cannot afford to be cowards and be intimidated.

China will also claim later that since they now own these islands under UNCLOS, all of the areas within 200 miles from the baselines of these islands belong to them.

China is ruled by dangerous hard-hearted, immoral,unethical leaders devoid of Christian or moral principles who pose a danger not only to the Philippines but to the whole world. They have already announced in Chinese government media their plan to control the whole West Philippine Sea region through sheer military might. Planting bases in Philippine territory is part of that plan. 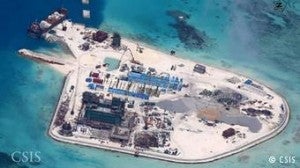 Even the millions of good people in China are victims of their oppression, greed and ego. Gone are the days when the ethical principles of great Chinese philosophers like Lao Tzu and Confucius dominated Chinese culture and society where philosopher kings ruled.

The Philippines has already practically exhausted diplomacy efforts and joint exploration offers. The terrible fire breathing dragon, dealing in bad faith – demands that for any meaningful talks to proceed, the Philippines must first agree to accept that the whole West Philippine Sea (or South China Sea as they call it) belongs to them – including those belonging to the Philippines under UNCLOS.

These aggressive repeated series of invasions and grabbing Philippine real estate are acts of war. Building military bases inside PH territory are acts of war. China show no signs of stopping these oppressive actions. The U.S. has repeatedly asked China to stop her coercion and intimidation of smaller countries and play by the rules. The U.S. Senate has passed two resolutions condemning China – affirming the use of military resources if need be if she continues with her abusive ways. China has not complied. Instead, her arrogant reply to the U.S. is: “Don’t interfere.”

If the small nation of Israel were faced with this kind of proximate already initiated military base construction threat from an aggressive enemy state, without hesitation, her fighter planes and drones would immediately destroy these structures. Justifiable self defense concerns directly related to the security of the Israeli people compels such an actions.

Military bases have only two purposes: To use as defenses from enemy attack; or to attack enemies. No nation is attacking China. As such, she cannot justify the construction of these bases by claiming that she needs them for self-defense. Her construction of these bases deep in Philippine territory in commandeered atolls and islands in violation of international and civilized laws clearly indicates her nefarious plan to use these bases for coercive attacking purposes.

The Philippines and surrounding Asian nations have no choice: These future bases must be destroyed now. The fighter planes and missiles that will be deployed there will be daggers aimed at the major cities of these countries. We and they simply cannot allow these bases to be constructed.

“But we are not Israel, we don’t have fighter planes or drones.” – would be the reaction of many Filipinos.

We can get them.

Consider this: The Philippines has mutual security arrangements with wealthy powerful countries. The United States, Japan and Australia. Now, if these Chinese military bases in Philippine territory become realities, aside from the Philippines, the national security of several nearby countries will be at risk: Vietnam, Indonesia, Malaysia, Brunei, Japan, Palau, Taiwan, Cambodia, South Korea, Thailand, Laos, Myanmar, Singapore.

China is acting like a rogue dangerous bullying country which does not play by the rules. The country’s political and military leadership follow the former Communist Party Chairman Mao Tse Tung’s thoughts: “Political power stems from the barrel of a gun.” 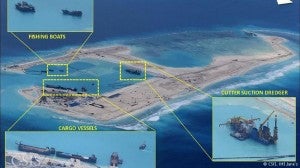 These future Chinese military bases are the guns meant by China’s leaders to possess global political power – an extremely perilous situation for all the countries in the region. American economic and military interests are also at risk – as well as regional stability. As such, these affected countries also don’t want these bases to be constructed. Not only will they be sympathetic to the Philippines destroying these future bases, they will support it.

The Philippines must request from her mutual security partners the means to destroy these future bases now and assurance of full support against retaliation. Enough persuasive reasons can be presented to the leaders of the U.S. Japan and Australia – to provide to the Philippines the needed planes, smart powerful bombs, drones and technical advice.

After these bases are destroyed, the U.S., Japan, Australia, the Philippines and other allies must immediately announce this message or something similar – to the world and to China:

“In its legitimate exercise of self defense – the Philippines has destroyed future Chinese military bases deep within Philippine territory being illegally constructed by China on Philippine atolls and islands in violation of international law. Not only is the national security of the Philippines threatened by these future military bases, they also threaten the national security of several surrounding countries: Vietnam, Indonesia, Malaysia, Brunei, Japan, Palau, Taiwan, Cambodia, South Korea, Thailand, Laos, Myanmar and Singapore.

If China retaliates against the Philippines in any manner or form – military, economic or otherwise – she will face the same retaliation from the United States, Japan, Australia, Vietnam and other allied nations.”

With this fair warning, if she still retaliates, China risks annihilation – military, economic or otherwise.

We really have no choice: We have to destroy these future Chinese military bases now.