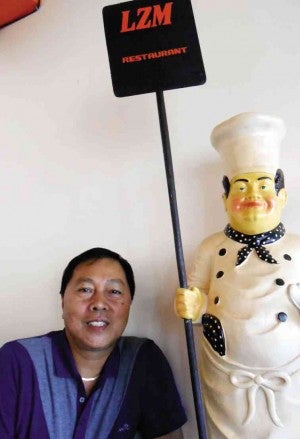 ‘A LITTLE LUCK, A LOT OF DETERMINATION’ is Rolando Anciro’s formula for business success. He is a hands-on manager at LZM Restaurant, Nuvali branch. photo by MA. ESTHER SALCEDO-POSADAS/CONTRIBUTOR

When Rolando Anciro first got the idea of migrating to the United States more than 20 years ago, he was reluctant to go as he had a good job as a mechanical engineer working six years already for Lucio Tan’s Granspan Development Corp.

“I didn’t want to leave my job. At that time, America was in recession.” He explains that he was newly married then to his wife Maria (a Filipino-American) who was responsible for petitioning him.

His Filipino boss also didn’t want him to leave and suggested that he take an indefinite leave of absence instead.

In the end, Anciro decided to resign after much prodding from his parents.

When he finally landed in Queens, New York, in 1992, Anciro felt  homesick and wanted to go back.

He relates, “At the beginning, my resources were limited. When I got my green card and SSS number, I looked for a job related to what I did in the Philippines. They said I was qualified but didn’t have local experience.”

He was told that he would need to go back to school again to get his license.

“I looked for any job to have local experience. I got a job at Bed, Bath and Beyond thinking that it was a maintenance or mechanical job. They asked me to start that day. I found out that they wanted me to do housekeeping—cleaning the toilets, getting cars outside the parking lot, and cleaning the floors. I quit the next day.”

He called the manager the following day and told him that it was not the job he was looking for.

After a week, Anciro managed to get hired by a coffee vending machine company as a mechanic and he stayed with them for about three years.

With regard to life in America, Anciro remarks, “It’s hard. All work. You have to earn everything and pay for everything.” He says that it was only after his first baby was born in 1994 that he decided to stay for the long term.

By 1997, Anciro managed to get hired as a mechanic (dice setter) for Micro Contacts Inc. (MCI) doing metal stamping for car parts.

Aside from his day job, he also worked at Macy’s Department Store as a lead man. After three years, Macy’s offered him a manager position that required giving up his day job but he declined because the offer wasn’t attractive enough. He stayed with the two companies until he returned to the Philippines in 2011.

While he was busy working on two jobs, Anciro started to consider going back to the Philippines. “When my sister told me stories about the success of our branch in Tagaytay, she encouraged me to go home and build another one,” he says.

By 2009, the big recession hit the US. “My 401K was almost wiped out. Everywhere there were layoffs.”

Roland shares that his employer, MCI, downsized from 350 workers to 40 workers. He was one of those left behind and they were required to multitask.

By 2010, more job uncertainty came in the form of company news that they were building a plant in Costa Rica and may eventually close down the New York plant in two years. It was at that point that Anciro told his kids that he was going back to the Philippines to start LZM Restaurant’s Nuvali branch.

LZM was started by Anciro’s mother and her sisters as a “palengke turo-turo” that evolved into a restaurant, discovered by celebrities and featured in media.

His daughter who’s closest to him was affected by his decision. “She was depressed about the move,” Anciro says.

His wife decided to stay behind with the children who were in school. Anciro explains that they were struggling with finances due to credit card debt. “Although I got two jobs, I could hardly meet our monthly expenses,” he continues.

By 2011 and at 51 years old, Anciro returned to the Philippines to start a new business venture. Anciro says that LZM Nuvali branch was a success from the first day of operations. He doesn’t regret the decision to retire in the Philippines.

“It’s good I decided to return. I’m earning much more than my two jobs in the States. And I’m working for myself and at the same time, helping others to have a decent job.”

With regard to his family, he talks to them daily via the computer and they visit each other either in the Philippines or in the US. His wife is also thinking of joining him when the children have graduated from school. The kids who were already born abroad are not considering moving to the Philippines.

Anciro says that Fil-Americans would ask him for advice on what would be a good business to start. There are many possibilities but it’s important to plan well.

“Before they go back home, they should have the mindset of what they’re going to do. If you have no plan, it’s hard to support your American lifestyle. Even before I resigned, I was already building the branch,” he explains. “You need a little luck and a lot of determination,” summarizes Anciro, on his formula for business success.