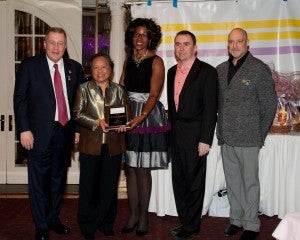 NEW YORK CITY — The Queens Lesbian and Gay Pride Committee, which organizes the second largest Pride celebration in this city after Manhattan, honored Therese R. Rodriguez, the Filipina CEO of Apicha Community Health Center, for her contributions to the LGBTQ movement.

The Queens Pride Committee also gave awards to Melissa Mark-Viverito, Speaker of the New York City Council, and the Queens Community House, which provides thousands of Queens residents with programs and services, advocacy and community building, at its Winter Pride Dinner Dance held in Astoria World Manor in Astoria, Queens, on January 24.

“Rodriguez is one of the most inspirational leaders in the LGBTQ movement in New York City,” said Dirk McCall, the director of external affairs for Bronx Borough President Ruben Diaz, Jr.

This latest recognition of Rodriguez and Apicha testifies to their success in overcoming incredible obstacles.

About to close down

Apicha in the mid-2000s, then known as Asian and Pacific Islander Coalition on HIV/AIDS (APICHA), was on the verge of closing down after over a decade of dedicated service to marginalized communities.

The economic downturn post-9/11 in Lower Manhattan, the location of Apicha’s headquarters, and the severe recession that followed hit the organization hard.

The board of directors wondered whether Apicha could continue to exist.

But Suki Terada Ports, a board member and longtime community activist, argued against closure, posing questions like, “Since when was Apicha not under the gun?  Where will Asians and Pacific Islanders living with HIV/AIDS go? ” Her persuasive words worked like magic.

Rodriguez and the rest of the staff worked closely with a succession of board chairs and members to stabilize Apicha financially and also guide its evolution from an AIDS service organization into a full-fledged community health center, officially

By 2012, Apicha had increased its revenue to $5 million, putting the agency “in the black.” Its impressive accomplishments did not escape the notice of city, state and national officials.

In 2013, Apicha received, among other grants, $6 million from the New York State Department of Health to expand its services as a vital access provider to marginalized populations. Apicha’s annual budget has doubled to $10 million this year, and the number of regular clinic patients has grown steadily, almost 1,400 today, mostly poor, people of color and largely foreign-born. More than half of them are living with HIV and AIDS.

Rodriguez, who has led Apicha since 1997, explained, “Our system of care for people with HIV and AIDS has been nationally recognized. Our view is that health is not only about absence of disease, but also about the individual’s physical, mental, emotional and spiritual wellness. Thus, we provide case management to these individuals with a wide range of support, from HIV care coordination to employment to housing to immigration counseling.“

Apicha is one of the few AIDS service organizations that has successfully transformed from its HIV-focused mission into a community health center, expanding services to clients who are not HIV-positive but who are at risk for HIV and AIDS.

Corey Johnson, a member of the New York City Council from the Third District in Manhattan, lauds Apicha’s comprehensive approach to health care and cites his own experience with the organization in a speech he delivered at Apicha’s annual Gala in May 2014.

In 2004, Johnson was a 22-year-old newcomer to the city, who was left in shock after finding out that he was HIV positive. To compound his fears and anxiety about his diagnosis, he had lost his health insurance two weeks before the diagnosis.

Someone at his doctor’s office gave Johnson Apicha’s address, and one day he walked miles to its headquarters in Lower Manhattan. He received a warm welcome from staff members, who arranged for his care and put him in touch with a social worker, who helped sign him up for the AIDS Drug Assistance Program, giving him access to necessary medications.   Much to his surprise, they also scheduled him for acupuncture treatments. Because he did not have coverage, he received all of these services free of charge.

Johnson, now 32 and one of New York’s rising city officials, ended his narrative on an emotional note. “I will always remember the open hand, the hugs, the follow-up phone calls and the acupuncture to this day,” he said. He added that he would continue “the fight forward so we can take care of people living with HIV and AIDS and also stop the spread of HIV and AIDS in New York City.”

Rodriguez welcomed the historic passage of President Obama’s Affordable Care Act in 2010, which stresses general primary care, enabling patients to receive a spectrum of services, ranging from the preventive to the curative. The law further expands the role of community health centers by mandating that HIV treatment be integrated into clinical programs.

“While we have already been providing primary care for people living with HIV and AIDS for years, the changes brought on by Obamacare were formidable,” Rodriguez said. “Not only did we have to transition from an HIV agency into a community health center, we had to learn how to generate revenue from government and commercial insurance instead of depending solely on grants.” 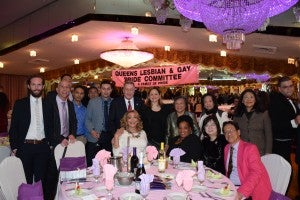 Not shy vs. challenges

Armed with her proven track record as CEO of a non-profit organization, Rodriguez has never shied away from daunting challenges. She credits Apicha’s dedicated board of directors and staff with helping her get through organizational difficulties in the past.

Being an immigrant and having had extensive experience in the Filipino community in fighting discrimination enabled her to fully grasp the urgent need to fight for equality in health care for the most vulnerable communities in the U.S.

A former civil rights attorney at the Asian American Legal Defense and Education Fund, Magpantay added, “Rodriguez has provided astute and visionary leadership at Apicha over the years.”

Rodriguez also brings a personal dimension to her advocacy for HIV and AIDS services. In her acceptance speech at the Pride Committee’s event, she shared her story about coming out as a lesbian to her family. Rodriguez related, “It took an experience of great despair for me to risk coming out…to seek my mother’s emotional support. My 86-year-old mother, raised Roman Catholic, embraced my fullest humanity, her lesbian baby, age 56. It was as exhilarating as falling in love.”

Rodriguez said that as a lesbian she fully understands the myriad difficulties that LGBTQ individuals face in choosing either to come out or live in secrecy. Knowing the often-deleterious effects on LGBTQ’s health when they try to navigate these emotional journeys, Apicha exercises a great deal of sensitivity in the medical management of this population.

In 2014 alone, Apicha administered more than 1,900 HIV tests and provided counseling to LGBTQs about sexual choices and practice of safe sex. Its innovative Trans Health Clinic, which began in 2011, addresses the distinct needs of men and women of transgender experience. The clinic now serves 300, up from the nine who first enrolled in the program in 2011. It also hosts drop-in nights for young Asian American gay men to make them feel part of a community.

By 2016, the organization hopes to further increase the number of patients and clients and build more exam and counseling rooms to accommodate additional caseload. But the indefatigable CEO, whose strategic thinking has served Apicha well, aims even higher. At the Queens Pride Committee’s January 24 event, Rodriguez shared her bold vision for Apicha’s future.

“My dream is a co-located Community Health Center and an inclusive Asian and Pacific Islander LGBTQ Center in Jackson Heights, Queens. Jackson Heights is home to many of the world’s people, profoundly immigrant. Our social institutions need to start reflecting this diversity, and the intersection of these two groups in one physical location would represent a model of care, empowerment and safety net for these communities.”

Rodriguez thanked the Queens Pride Committee for honoring her, an immigrant of color. “By doing so,” she noted, “you are paying tribute to the journey of our ancestors, who were looking for the same religious, political and economic freedoms as other immigrants.”

The audience of 400, so far the biggest attendance at the Queens Pride Committee’s annual winter event, gave Rodriguez a standing ovation.