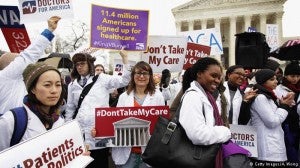 Pro-Obamacare rally in front of the US Supreme Court. DW PHOTO

SACRAMENTO, California — Even as the US Supreme Court is reviewing legal text that potentially could derail the Affordable Care Act or Obamacare, half a million more people signed up for health plans during the open-enrollment period ending February 22, Covered California announced March 5.

A legal challenge to the Act that could erase tax credits used by millions of Americans to pay insurance premiums, leaving 34 states with unmanageable insurance markets, rising premiums and millions more people uninsured.

The main argument advanced by the law’s opponents is that four words in the 906-page statute permit the use of tax credits only in states that set up their own health insurance exchanges. The Supreme Court appears divided on the issue.

This year’s mix of 495,073 enrollees is a more diverse and younger population whose choice in plans demonstrated that pricing is a big factor. “It is clear Latinos, African-Americans and young adults not only heard, but acted on Covered California’s increased advertising and person-to-person outreach,” Covered California Executive Director Peter V. Lee said.

Nearly nine out of every 10 new enrollees qualified for some level of financial help for 2015. New enrollments of subsidy-eligible Latinos surged 6 percentage points — from 31 percent in 2014 to 37 percent of the overall subsidy-eligible enrollment in 2015.

The Service Center handled more than 1.3 million calls from November through February — more than twice the number it did for the same months during the first open-enrollment period. In February 2015 alone, Service Center representatives provided assistance to more than 440,000 callers, compared with 153,000 in February 2014. 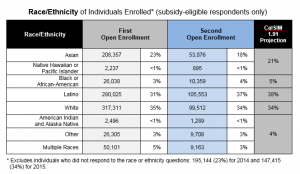 Covered California ended its second open-enrollment period February 15, but allowed consumers until midnight on Sunday, Feb. 22, to complete their applications for coverage. (This deadline had been Feb. 20 but was extended by two days to align with the deadline adopted by the federal government.)

“Consumers needed personal assistance from more than 20,000 Certified Insurance Agents, Certified Enrollment Counselors and enrollers at the Covered California Service Center to help them get across the finish line,” Lee said.

Of the subsidy-eligible consumers who enrolled in the exchange, about 63 percent of the total signed up for a Silver plan, the second-least-expensive plan of the four metal tiers.

Among the 10 participating health insurance companies, Kaiser Permanente had the largest percentage increase in new enrollees. It captured 28 percent of the total, compared with 17 percent during the 2014 open-enrollment period.

Through April 30, 2015, consumers are eligible to apply for health coverage during special enrollment. Applicants must attest to the fact that they did not realize there was a tax penalty by selecting “Informed of Tax Penalty Risk” within a dropdown menu at CoveredCA.com.