No firing squad yet for doomed Filipina 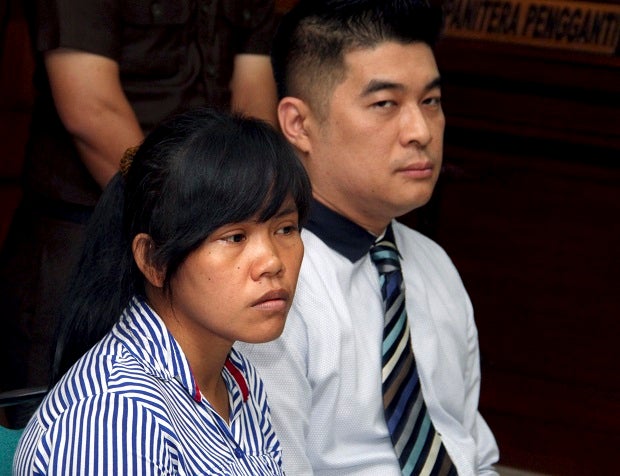 Philippine national Mary Jane Fiesta Veloso, left, who is on death row for drug offences, accompanied by an unidentified interpreter, attends her judicial review hearing at Sleman District Court in Yogyakarta, Indonesia, Wednesday, March 4, 2015. Two convicted Australian smugglers arrived Wednesday at an Indonesian island prison where they will be executed by firing squad along with seven other foreigners, including Veloso, amid a diplomatic squabble with some of their governments. An Indonesian is also scheduled to be executed. AP

MANILA, Philippines–The execution of the Filipino woman convicted of drug trafficking in Indonesia has been deferred after her case was elevated to that country’s Supreme Court for further review on Wednesday, giving Philippine officials and the woman’s family momentary relief.

The world’s eyes are focused on Indonesia as Australian leaders scramble to stop the execution of two nationals among the nine drug convicts transported to Nusakambangan Island where they will face a 12-member firing squad.

Filipino Mary Jane Fiesta Veloso, 30, was not with them.

Assistant Secretary Charles Jose, the Department of Foreign Affairs (DFA) spokesperson, said that as of Thursday, Veloso was still in Yogyakarta to attend hearings of the case.

“There will be no execution until the judicial review has been completed,” Jose said in a news briefing at DFA headquarters in Manila on Thursday.

The Yogyakarta district court heard the case on March 3 and 4 after the Philippines appealed for a further review.

The Philippines has questioned the accuracy of the translation in Veloso’s trial since she was provided with a student interpreter instead of a qualified court translator.

“If the translator was not a qualified court translator, there might be an impact on the proceedings,” Jose said.

While the lawyers of Veloso had not pointed out any discrepancies in the court transcripts, Jose said the translation question was an argument that has been given merit by the local court.

“The court decided to endorse the case to the Supreme Court. We are now awaiting the schedule of the hearing,” he said.

Veloso, a mother of two from Bulacan, was convicted of drug trafficking and sentenced to death in Indonesia in 2011 after she was caught with suitcases containing heroin at the airport.